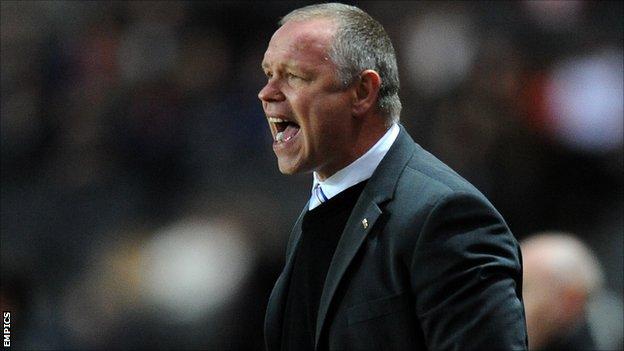 Hartlepool United first-team coach John Hughes has said he and his staff are assessing potential signings to the squad during the transfer window.

The 48-year-old inherited a Pools side bottom of League One in November and is keen to strengthen the squad.

"We need to bring in the right character," Hughes told BBC Tees.

"It's sometimes hard at this stage of the window to get the right player for the club because they're all signed up, but we're working hard."

Hughes has made tough decisions since taking over from Neale Cooper, sending Sunderland's Ryan Noble back to his parent club, but for Middlesbrough striker Charlie Wyke.

Wyke, 20, repaid the faith shown by Pools with the equaliser in Saturday's 1-1 draw at Shrewsbury and took the club's points-tally to four from a possible nine.

"I'm delighted for Charlie and we're delighted to extend that deal," added Hughes.

"He gives us those extra legs up front, he listens, he's a great training and that inspires you. He's always got that cheeky smile on his face.