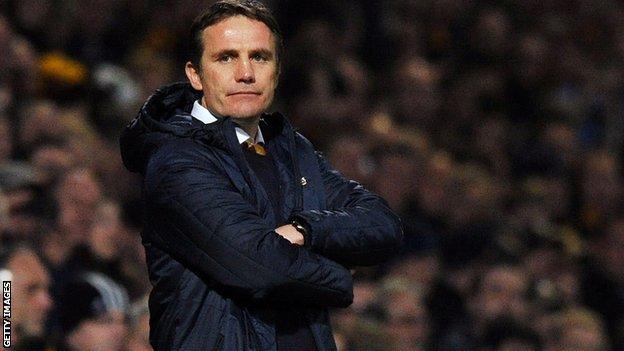 Bradford City boss Phil Parkinson says it would have been "bad practice" for him to have spoken to Blackpool about their vacant manager's position.

He turned down the chance to meet with the Championship club on Friday.

The 45-year-old told BBC Radio Leeds: "This is a great club and it would have been bad practice of me to look to move with everything we have got going on.

"The fans and board have been exceptionally good to me and I want to repay that by bringing success."

Next Tuesday's Capital One Cup semi-final second leg against Aston Villa will be Bradford's 42nd game this season. The same number of games Premier League Southampton will have played by the end of the campaign.

Parkinson has led the League Two side to the League Cup semi-final, where they currently hold a 3-1 first leg lead over Aston Villa, as well as Tuesday's Northern Area semi-final of the Johnstone's Paint Trophy at Crewe.

His current deal with the Bantams runs out at the end of the season and the former Colchester, Hull City and Charlton boss is keen to commit to a new contract.

"I spoke to the chairmen about new deals for my staff and myself and I'm waiting for them to get back to me," he said.

"I want to stay and I'm very wary of it becoming an issue. There's so much to play for and I'm sure it can get resolved and we can move on."

Away from their success in the cup competitions, the Bantams have recently endured a poor run in the league that has seen them drop to ninth in League Two and pick up just four points from their last five games.

Parkinson admitted that the physical effects of having played 39 matches already this season was catching up on them.

"This season has been unprecedented in terms of the number of games played and I want us to achieve everything we can," he added.

"You have to say we have a small squad and there's been a lot of focus on us because of the recent cup games against Arsenal and Aston Villa.

"We have to turn it around now but I do still feel we need one or two more players and I am trying to bring them in."