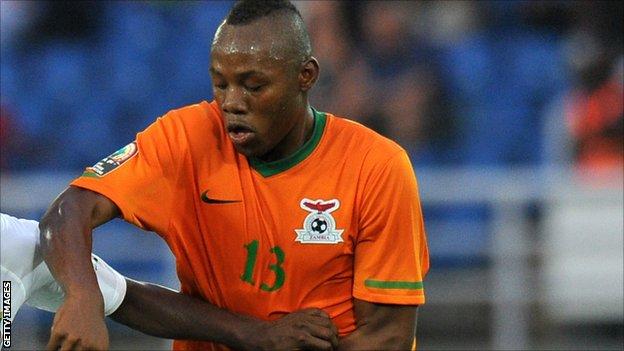 Zambia central defender Stopilla Sunzu is currently training with Reading ahead of a possible move to the Premier League club.

Sunzu, 23, plays for TP Mazembe in the Democratic Republic of Congo and is set to feature for his country at the 2013 Africa Cup of Nations in South Africa.

The centre-back will spend the week with Reading and will report back for international duty on 19 January.

Defending champions Zambia face Ethiopia in the opening round.

A statement on the Reading website said: "Sunzu has been given permission by Zambia and his club TP Mazembe to temporarily leave his country's Africa Cup of Nations squad, in order to train with the Royals and be assessed by our coaching staff.

"Stoppila will rejoin the Zambia squad later this week, ahead of their first Cup of Nations game against Ethiopia on Monday.

"The 23-year-old plays for TP Mazembe in DR Congo, but is well known to [manager] Brian McDermott after being at Reading FC in his teenage years and this training spell gives us a chance to reacquaint ourselves for four days."

Sunzu, who was shortlisted for African Player of the Year last year, was the scorer of the winning penalty when Zambia shocked Ivory Coast 8-7 in a shoot-out to win the 2012 Cup of Nations.

He was outstanding when the Chipolopolo (Copper Bullets) were held 0-0 at home by Norway last Saturday to complete a winless five-match build-up to this year's tournament.