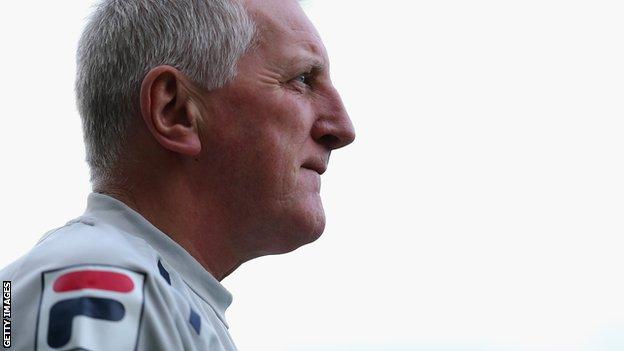 Ronnie Moore says he is almost spoilt for attacking options after Jean-Louis Akpa Akpro and Abdulai Bell-Baggie returned to the Tranmere squad.

Striker Akpa Akpro, fit again after a broken foot, played 23 minutes of the while winger Bell-Baggie was an unused substitute.

"You now look around at the bench and you've got options," said Moore.

"It's great when you know you've got players of quality that can hurt teams," he told BBC Radio Merseyside.

It would be nice if we're still where we are, or in and around that top-six area, when he's fit

However, Moore added that he would not turn down the opportunity to sign another striker if a suitable player became available to aid their push for promotion.

Prior to Saturday's victory at Prenton Park, former Rochdale man since 6 October, while Bell-Baggie has not played since suffering a knee injury on 7 November.

Forward David Amoo, who joined Tranmere on a deal until the end of the season last week, marked his first appearance with a goal as Moore's side made it four straight wins in League One.

But the fitness of one major absentee - captain James Wallace - remains a concern for the league leaders, who travel to Coventry on Wednesday.

The ex-Everton midfielder has

It was hoped that Wallace would be back in action on Boxing Day, but Moore revealed: "It could be two more weeks, it could be three weeks.

"It would be nice if we're still where we are, or in and around that top-six area, when he's fit. He might just come back at the right time for us."