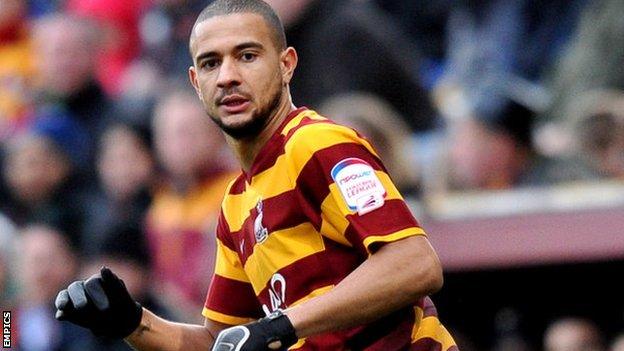 Bradford City full-back James Meredith could be facing a lengthy absence after being diagnosed with glandular fever.

The 24-year-old has not featured since going off at half-time in the 0-0 draw with Morecambe on New Year's Day.

What is glandular fever?

Manager Phil Parkinson told BBC Radio Leeds: "We had his blood tested and he was admitted to hospital over the weekend because it was that serious.

"Hopefully, he's OK and we get him back sooner rather than later but at the moment it is not looking good."

He continued: "It's a real blow because he's been very good for us this season.

"He'd been ill for a few weeks and it had been dragging on.

"It came to a head at the Morecambe game when he was sick and feeling dizzy and he's been at home ever since."

Meredith joined the Capital One Cup semi-finalists from York City in the summer and has made 33 appearances this season.

The Bantams play the second leg of their League Cup semi-final at Villa Park on 22 January, leading Premier League Aston Villa 3-1 from the first leg.