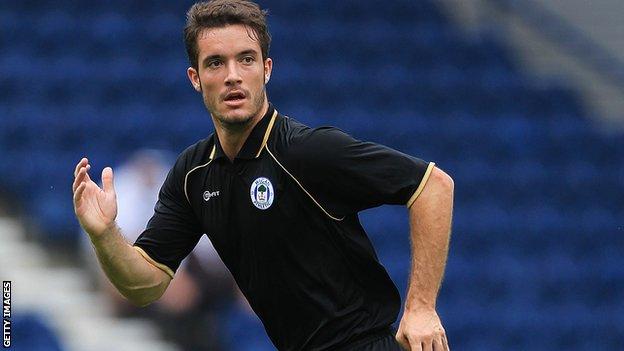 Roberto Martinez remains unrepentant about his team selection for cup games and will continue to put Premier League survival ahead of knockout success.

The Latics have only once gone past the fourth round of a cup competition under Martinez as he uses the tournaments to develop young talent.

He said: "If we don't win I'll take that responsibility but I'll never be shy of giving youngsters opportunities.

"The priority is keeping Wigan in the Premier League."

Wigan lie 17th in the league and are only out of the relegation places on goal difference. They travel to League One Bournemouth for an FA Cup third-round replay on Tuesday night after drawing 1-1 at home.

In two of the last three seasons Wigan have gone out of the tournament to sides from Bournemouth's level or below and they were knocked out of the Captial One Cup by League Two Bradford in October.

Martinez is once again likely to make significant changes, but he defended the players who are set to come in.

"In my eyes they are strong players or they wouldn't be with us," he said.

"It is all good for me to say I want to look at the youth, give opportunities to the young players and create a path to the develop the youngsters if I am not going to be brave enough to give them opportunities.

"I want to create something special at the football club where we can develop our youngsters.

"In the last game against Bournemouth we saw the debut of Roman Golobart, who has been on a three-year programme.

"Sometimes it can be unfair to put a youngster out in the Premier League when they are not ready because the gap between Under-21 football and the first team is huge.

"Sometimes having a competition in between, which is vital to win because we want to win in every competition, is something that as a club and a manager we need to be brave enough to give youngsters opportunities."

A draw at Fulham on Saturday kept Wigan out of the top flight's bottom three on goal difference.

Striker Franco di Santo scored an impressive equaliser for his fourth league goal of the season and first since October, but with Arouna Kone at the Africa Cup of Nations, the Argentine is unlikely to be risked against Bournemouth.

Di Santo's contract expires at the end of the season and he has already been linked with other clubs, with Martinez keen to hang on to the 23-year-old.

"As you know, we will lose players, we will have to move players on and we want to keep players," said Martinez.

"But all I am focused with on Franco is developing him, helping him keep fulfilling the potential he has got as a footballer and just having the impact he had at Fulham."