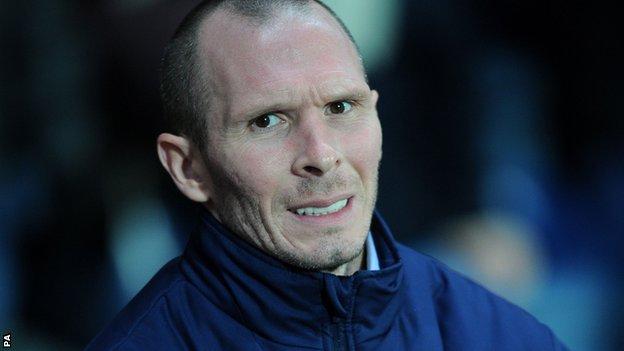 A last-minute penalty earned Brighton a point at Blackburn and denied Michael Appleton his first victory in charge of the Ewood Park side.

Blackburn continued to create the better chances after the break but could not find a second.

They were made to pay when David Lopez was pushed in the area and the Spaniard scored the resulting penalty.

Blackburn made the better start and only a fine save from Tomasz Kuszczak prevented the home side taking the lead after 15 minutes.

Rhodes fed a pass to Colin Kazim Richards and he in turn picked out Jason Lowe, but his shot was tipped wide by the Brighton keeper.

Liam Bridcutt had Jake Kean scrambling for the far post midway through the half, but that was the only chance of note for Brighton before the break.

Blackburn were awarded a penalty on the stroke of half-time when El-Abd bundled Pedersen to the ground from Martin Olsson's left-wing delivery, with Rhodes stepping up to score his fifth goal in as many league games.

Rhodes was denied another goal in the second half when his looping header was superbly stopped by Kuszczak.

It proved a vital intervention by the Brighton keeper as Albion snatched a point when David Goodwillie pushed over Lopez inside the Blackburn area deep in stoppage time and the midfielder picked himself up to fire home from the spot.

"Their keeper was certainly a lot more busy than our goalkeeper on the night. I think if we'd have got the second goal we'd have won the game comfortably."

Brighton manager Gus Poyet said: "I need to make sure that we don't keep drawing and drawing because it's too many.

"Do you know how many games we've lost this year? From 28 we've played we've lost six and we are not in the top six.

"How? Because we draw too many. It's better from now on that we win one and lose one."