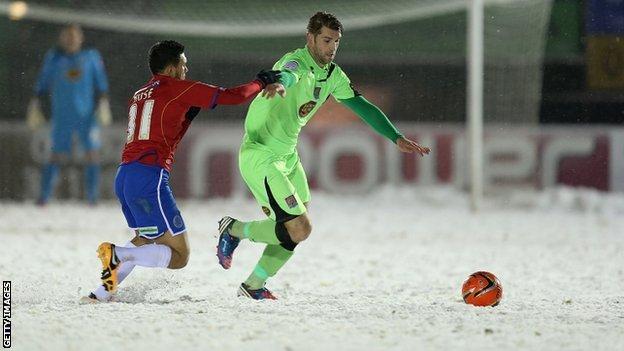 Clarke Carlisle scored the winner as Northampton came from behind to beat Aldershot and go third in League Two.

Daniel Lopez had given the hosts the advantage within two minutes after Adam Mekki had rounded the Cobblers keeper Lee Nicholls to set the goal up.

Chris Hackett pulled the visitors level from the spot after Michael Hector had handled in the area.

And Hackett turned provider when his corner was headed home by Carlisle for the winning goal.

The match had been in doubt after heavy snowfall but eventually went ahead.

"The conditions weren't good for both sides and we commend our club for getting the game on and the referee for making sure it was safe to do so.

"I thought we were unlucky to go in at 2-1 down and it's a reminder to my players that you have to do basics well.

"Very difficult conditions is all I can put it down to and you couldn't see the players. But two basic set pieces, for me, could've been eradicated."

"We didn't start very well at all. We were looking for our sun cream rather than our snow boots.

"In the end, we played the conditions better and took our chances. It was a proper old-fashioned game in ridiculous conditions.

"We've let ourselves down away from home of late and we do have to improve, and this is a good step.