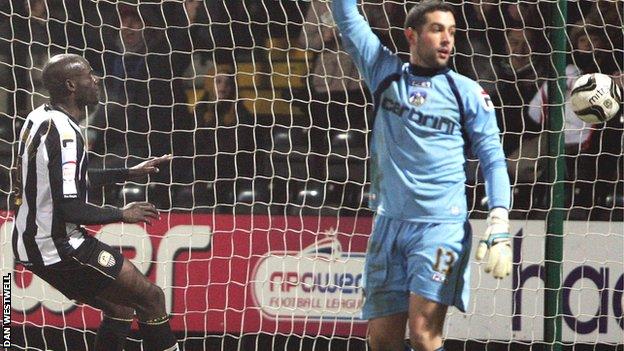 Jeff Hughes went close for the hosts with their first chance, while Alan Judge lofted a free-kick over the bar.

Notts went ahead as Andre Boucaud and Jamal Campbell-Ryce combined for Showunmi to score from close range.

Oldham pressurised after the break as Jonathan Grounds put a free header over the bar and Matt Smith saw his shot cleared off the line by Gary Liddle.

Judge and Showunmi had chances to extend the home side's lead but both fired wide.

The Magpies move up to 12th in the table, but remain six points adrift of the play-offs following

"I think that shows the two sides of the character that we have in the changing room.

"First half we were allowed to play and we caused them some problems.

"In the second half they got close to us, they made it a confrontational game and I thought we stood up to the task very well."

"It was disappointing. We didn't start the game well at all. We sat off Notts County and hey're a good footballing team.

"We wanted to come here and have a good go at them and we didn't do that well enough in the first half.

"After a rollocking at half time, we did that and could have got something from the game.

"The points total we've had recently isn't good enough. I'm a proud person and I want to win football matches. We're not doing that at the minute and it's a worry."