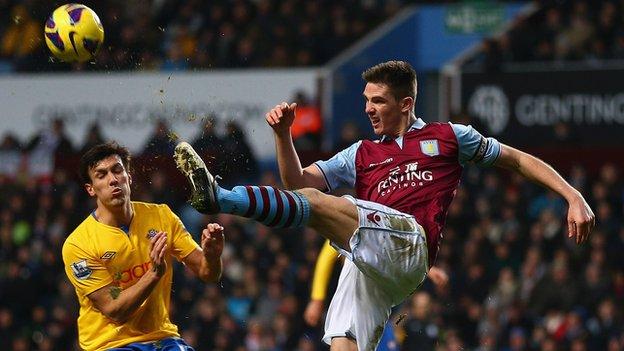 Aston Villa's stand-in skipper Ciaran Clark insists that the struggling West Midlands side are due a change in luck.

Villa, who face a two-goal deficit in their League Cup semi-final second leg against Bradford, have slipped into the Premier League's bottom three after a run of one point out of a possible 15.

But they felt hard done by in the 1-0 home defeat by Southampton on Saturday.

I've enjoyed being captain since Ron Vlaar got injured, then Gabby Agbonlahor too. But it's not just about one player. It's about the team. It's important everyone's a leader out there

"It was just one of those days when it didn't seem to go for us and hopefully that will turn," Clark told BBC WM.

Villa's main gripe was that Southampton's winning penalty, awarded for Enda Stevens's challenge on Jay Rodriguez, should not have been awarded.

"It was never a penalty," said Clark. "A goal like that is so frustrating. It puts you on the back foot straightaway."

Villa then created a host of second-half chances, being denied at the end when Nathan Baker's shot hit the bar.

"It hit the wrong side of the bar," added Clark. "If it hits the underside, it flies in.

"We created a load of chances and just couldn't find the back of the net. Another day, we could have scored three, four or five and we showed we're capable of causing problems.

"At the minute, we're just not scoring the goals. But, if everyone keeps giving their all and we stick together and stay positive, we'll get the luck one day and it will turn for us."

After their disastrous Christmas, when they shipped 15 goals in three games, Villa have stemmed the flow at the back, having now conceded seven in their last four matches.

And, after being sat on the bench last Saturday, captain Ron Vlaar is expected to be fully fit to return for this Saturday's short trip to West Bromwich Albion, for what would be his first start in 12 games since injuring his calf in the 0-0 draw against Arsenal on 24 November.

That may mean Clark handing back the armband, but he points out that, in Villa's precarious league position, and with the Bradford second leg to come next Tuesday night, they need leaders all over the park.

"I've enjoyed being captain since Ron got injured and then Gabby Agbonlahor too," said Clark. "But it's not just about the one player. It's about the team. It's important that everyone's a leader out there."