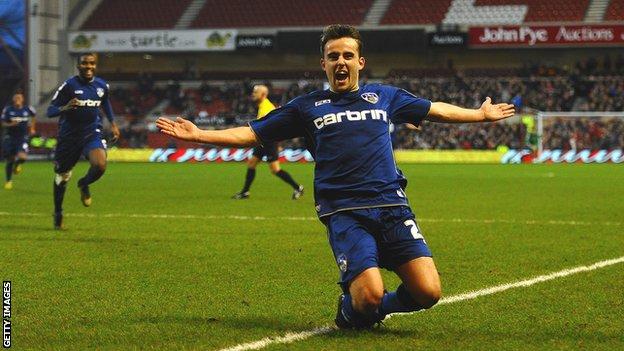 The 20-year-old, tipped as a future star while with Everton, found himself without a club during the summer.

Baxter has scored 11 times in 25 games and he on Saturday.

"I think he can play at the top level with the ability he's got," Dickov told BBC Radio Manchester.

"One thing he has to do is play games on a consistent basis and he knows he'll get that here."

Baxter made just one top-flight start for Everton and he in search of first-team football.

He signed a short-term deal with Oldham a month into the new season and has impressed his manager with the level of his performances.

"I watch a lot of games and I firmly believe that he's one of the top talents outside the Premier League," added former Scotland striker Dickov.

"Jose, his agent and his family deserve a lot of credit as well. Players and agents get a bad name for themselves, but they wanted what was best for Jose and they believe me when I say that this is the best place for him at the minute.

"He appreciates the chance that he's been given and he feels that, with the work we're doing with him, he's improved already. He can only get better."