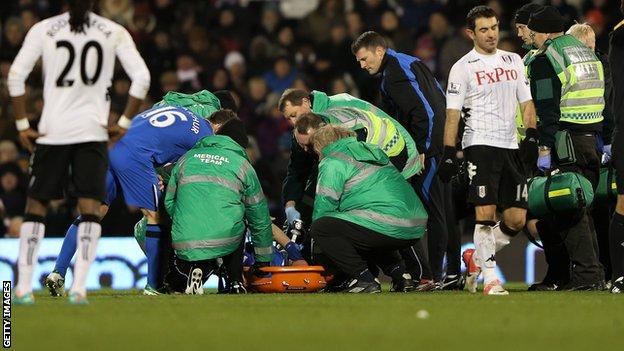 Wigan centre-back Ivan Ramis has been ruled out for the rest of the season because of a knee ligament injury.

Ramis, 28, was taken off on a stretcher in and scans show he has ruptured his anterior cruciate ligament in his right knee.

"Nothing can disguise the fact this is a massive blow because Ivan is a key member of the group," said Latics boss Roberto Martinez.

"But we're relieved it is not as severe as we feared it could have been."

The defender, who was in August, has made 19 starts in all competitions for Wigan and has become an important part of their defence.

He will undergo surgery on the injury as soon as possible and it is hoped he will recover in time for the start of next season.

Meanwhile Martinez is expected to try to bring in cover for Ramis in the January transfer window.

"The most important thing now is to think of Ivan's welfare, get the operation completed, and for him to begin his rehabilitation," added Martinez.

"Ivan is a very strong and positive character and he is determined to return to fitness as soon as he can.

"He will receive the best possible medical rehabilitation as the club ensures to have him return as an even stronger footballer."