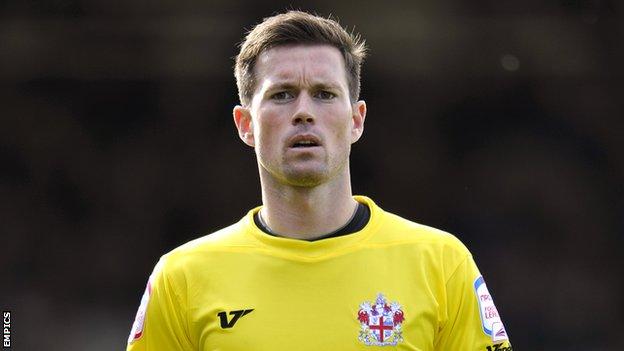 Gillingham goalkeeper Stuart Nelson is confident the club will be able to return to the top of League Two.

Port Vale replaced the Gills at the summit after winning 2-1 at Priestfield Stadium on Saturday, but the Kent club have a game in hand.

Nelson told BBC Radio Kent: "You might build it up as the game of the season as it is two good teams doing battle.

"But we have still got a game in hand and if we win that we will go above them. It is not a massive loss."

The 31-year-old added: "We can't affect those three points now, they've gone. It's about how we bounce back."

Gillingham are now one point behind Vale and eight points above Rotherham, who currently lie fourth and occupy the first of the play-off places.

Manager Martin Allen, who targeted promotion to League One when he took the job in the summer, wants his side to turn around their form at Priestfield.

The side have lost three of their last four home league games and have not won on their own ground since the 2-1 victory over Morecambe in November.

"There are things to look at and things to try and make us better, here especially," Allen told BBC Radio Kent.

"When you haven't won here for a few weeks then of course little things slip into the back of your mind.

"You could say demons start to do strange things to confidence, especially after such a brilliant start to the season, and at home.

"The winning team only gets three points, but if we'd won [against Port Vale] we would have been five points clear with a game in hand and that would have been significant.

"We have had another setback and now we have to dust ourselves down.

"We have got to learn and we have to improve what we do here."