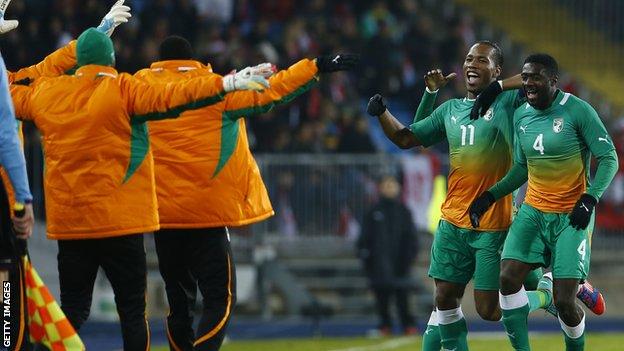 Ivory Coast defender Kolo Toure praised the belief in his side after they completed their Africa Cup of Nations preparations with a 4-2 win over Egypt.

The Elephants extended their unbeaten run to 23 games with the win over the seven-time African champions.

Gervinho scored twice and Lacina Traore and Dider Ya Konan added two more in the Ivorians' only warm-up match.

"It's always really important to win a game before the Nations Cup, especially against Egypt," Toure told BBC Sport.

"It gives us a lot of belief, because they are really fantastic."

Egypt have failed to qualify for the last two Nations Cup tournaments, after winning three continental titles in a row, but the Manchester City defender emphasised the importance of the friendly result in Abu Dhabi, ahead his side's departure for South Africa.

"They have been the top team for the last 10 years, for me, in Africa," he said.

"Now they are struggling a bit but for us it was very important to win this game."

Toure's brother, Yaya, sat out the win over the Pharaohs, after the African Player of the Year missed training with illness last week at the Elephants' pre-tournament base in the United Arab Emirates.

However, team officials said there were no concerns over his fitness for the upcoming tournament.

The 2012 finalists head to South Africa as favourites once again and in pursuit of a second title to add to their single triumph in 1992, but are in arguably the toughest group, alongside Tunisia, Algeria and Togo.

They open their Group D campaign on 22 January against the Togolese in Rustenburg.

Meanwhile, Angola wrapped up their Nations Cup preparations with a 2-0 win over Botswana in Soweto.

Former under-21 Switzerland striker Guilherme Afonso opened the scoring for the Palancas Negras, with Manucho adding a second.

Afonso was a surprise inclusion in coach Gustavo Ferrin's final 23-man squad for the finals.

Angola play in Group A, alongside the hosts Bafana Bafana, Cape Verde and Morocco, who they meet in their opening game in Johannesburg on 19 January.