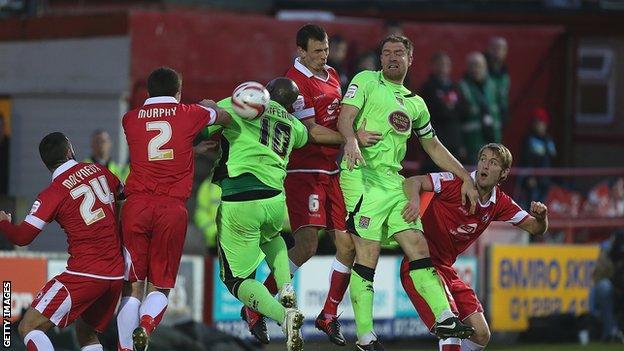 Accrington are not contemplating relegation from the Football League despite their lowly position, according to managing director Rob Heys.

Stanley are 19th in League Two, only four points above the drop zone.

"It (relegation) is not a banned word as such, but it's not something we're really considering at the moment," Heys told BBC Radio Lancashire.

"We've got to win a few more games in the new year and we've got the squad that's capable of doing that."

FA Cup: Beat non-league AFC Fylde in round one, but lost to Oxford in second-round replay

Stanley were promoted into the Football League in 2006 under John Coleman, and reached the play-offs in the 2010-11 season.

However, the current crop of Stanley players have won just two league matches since Richardson was confirmed as successor to

The League Two club announced a three-year shirt and stadium sponsorship deal with storage company Store First on Wednesday, which will be worth a six-figure sum to Stanley.

Their Crown Ground home will now be known as the Store First Stadium.

"It sends out signs much further than Lancashire and the north west," added Heys.

"People will see that Accrington have announced a major new sponsorship deal, and in these economic times when people are struggling, it sends out a signal that Accrington mean business and we intend to stop in the Football League."