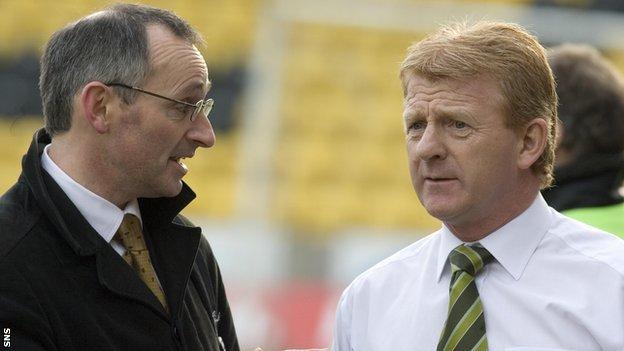 Former international winger Pat Nevin insists there is much for new Scotland manager Gordon Strachan to play for in the six remaining World Cup qualifiers.

Scotland prop up Group A with two draws and two defeats from four games so far.

Nevin told BBC 5live: "Scotland have to come third in the current group. If he gets us to third place, the position in the next group of pots when the draw is made for the Euros is much better.

"Thank goodness he is in - he has to make a difference."

Strachan's appointment should please those Scotland fans who urged the Scottish Football Association to turn to him when Craig Levein's reign petered out in Hampden World Cup qualifying draws with Serbia and Macedonia and away defeats in Wales and Belgium.

With Belgium and Croatia both on 10 points after four qualifiers, Serbia and Macedonia on four points and Wales a point above the Scots, Strachan has a mighty task to even get the national team into the runners-up spot that would most likely command a play-off to reach the 2014 World Cup finals in Brazil.

However, third place seems a more realistic target for Strachan, capped 50 times as a Scotland midfielder.

"It's a tough job and you need a big personality to come in and do that job," he said.

"He's proven, he's Scottish and he's accepted by the Tartan Army, but he has a massive job to do and it starts right away."

Paul Hartley, now manager of Alloa, played under Strachan when he was manager at Celtic. He is backing the new boss to make a positive impact in his new role.

"I know Gordon's been out the game for a little while but he knows the scene up here," he said.

"Time will tell if he is the right man but I think it is a great appointment for Scotland. It gives everyone a lift.

"He is a great coach, he is always on the training ground, he knows his stuff, how to organise a team, he is very passionate and he has great energy.

For all his support, Hartley acknowledges that Strachan will be judged on leading Scotland to their first finals since the 1998 World Cup.

He added: "The key thing is to get results. We've not had great results in the last 18 months or so, so hopefully Gordon will bring that back.

"When you are the national manager it is about qualifying for a European Championship or a World Cup. Friendly results don't really matter.

"You've got the nation on your shoulders looking for a result. All eyes are on you. It's such a massive job. Hopefully he can go in and get the results that we need."