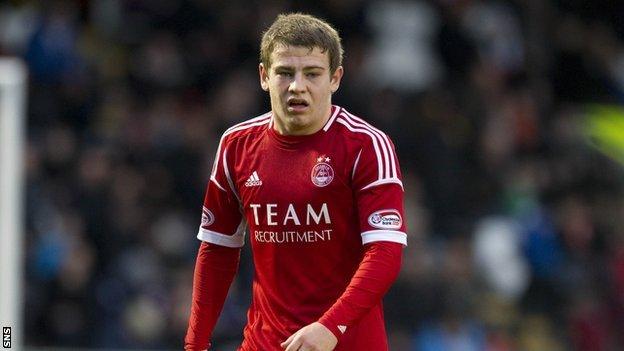 BBC Scotland has learned that English League One side Bournemouth have been given permission by Aberdeen to speak to winger Ryan Fraser after a transfer fee was agreed between the clubs.

The 18-year-old has impressed this season but rejected the offer of a new contract in December and will hold talks with The Cherries on Wednesday.

Bournemouth are the only club so far to have met Aberdeen's valuation.

The Dons will receive a transfer fee for Fraser if he leaves in January.

But if the Scotland Under-19 international's departure is at the end of the season when his contract expires, Aberdeen would only be paid a nominal compensatory development fee.

This would be about £250,000, having received similar for Fraser Fyvie last summer after he departed for Wigan.

It would be the latest blow for Aberdeen given Fyvie and, before him, team-mate Jack Grimmer left for England having also rejected new Dons deals.

The club's directors have been weighing up whether they should cash in now or keep the player until the end of the season should they think Fraser can help them make a significant impact on the league and Scottish Cup for the rest of the term.

However, Bournemouth manager Eddie Howe refused to be drawn on how their move for Fraser was progressing.

Bournemouth - who have financial backing from Russia - are currently seventh in League One and on the fringes of the promotion play-off places.

Fraser trained with the rest of the Aberdeen squad on Tuesday.