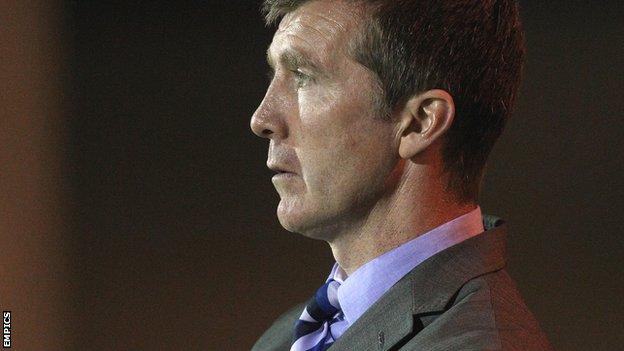 Gannon, 44, was in his second spell in charge after returning in November 2011, but the Hatters are now 21st in the table after their defeat.

"James Gannon has been relieved of all football duties," said a club statement released late on Tuesday.

"The board will be meeting to determine his successor."

County have won just one of their last nine league matches.

"Jim Gannon has had to work with a really young team and they've made mistakes that more experienced sides wouldn't have done. It's such a tight division - they can still get out of it. There's 20 games to go and they're only three wins away from being in eighth or ninth place."

Gannon, who made 383 league appearances for the Hatters between 1990 and 2000, started his managerial career at Dundalk before taking over at County.

His first spell was hugely successful, winning promotion to League One via the play-offs in 2008 the highlight of his initial three-and-a-half-year stint.

But financial problems led to Gannon being made redundant in the summer of 2009.

He went on to have spells in charge of SPL side Motherwell and Football League outfits Peterborough and Port Vale, however none of them lasted longer than 25 games.

just three months into their first season in non-league football in over a century.

Thanks to an excellent run late of results, the Hatters finished 16th at the end of the 2011-12 campaign.

However, this term was another of struggle for County, and a sequence of seven defeats in nine league games has resulted in Gannon's departure.

Former Hatters defender Michael Raynes, now at Oxford, said on Twitter: "Can't believe the news I am hearing from my old club Stockport, sacking Jim? My opinion, he is the only man able to get them out this situation."