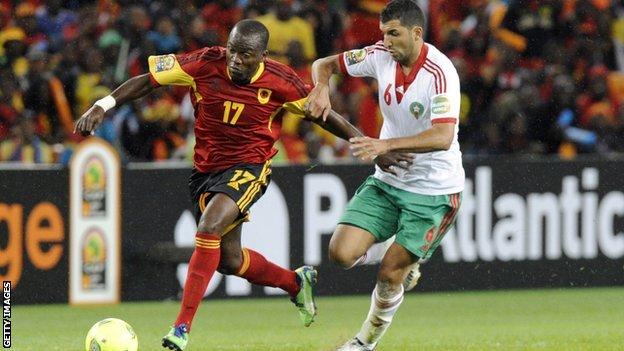 Angola and Morocco produced the second stalemate of a frustrating opening day at the Africa Cup of Nations.

The second Group A game of the day had its share of opportunities, but neither side was able to break the deadlock.

Moroccan playmaker Younes Belhanda almost forced a winner as he dribbled through the Angolan defence, but dragged narrowly wide at the near post.

The Atlas Lions were forced to begin their campaign without inspirational playmaker Younes Belhanda in the starting line-up, after he had struggled in the build-up with an adductor injury, but would be forced into introducing the influential Montpellier man in the second half.

Despite being regulars at Nations Cup tournaments, the Atlas Lions have failed to qualify for the knock-out stages in six of their last eight appearances

Angola had the first real attempt on target, as Mingo Bille stung Lamyaghri's fingertips with a well-hit low drive.

Morocco quickly attempted to stamp their authority on the game, with Abdelaziz Barrada and Liverpool winger Oussama Assaidi looking to force the play in the Angolan half.

It was a lively first quarter for the Moroccans, who sought to create opportunities with every passage of play and they went close through Assaidi, who jinked inside the box, only to blaze over.

The Palancas Negras' early attempts to get a foothold in the game were laboured, as they struggled to link up midfield and attack, and failed to commit numbers forward on the break.

Former Manchester United striker Manucho was lucky to stay on the pitch, as he rashly dived in on Morocco's Adil Hermach and received a yellow card.

Morocco, who had started so promisingly, saw their chances dry up, as Angola improved as the first half went on.

And early in the second half, substitute Afonso almost quickly turned Angola's fortunes, as he latched onto Lamyaghri's fumbled ball, only to see his snapped shot trickle narrowly wide.

The former Switzerland Under-21 international's introduction sparked life into the Angolan side, as he continued to make a nuisance of himself and almost forced the Moroccan defence into another error, which Lamyaghri scrambled to gather gratefully.

Fiorentina's Mounir El Hamdaoui replied for Morocco by bursting forward at pace but he lashed wide.

Belhanda was finally introduced on the hour mark and he almost made an immediate impact as he broke into the box, dribbled around the Angolan defence, skipped inside but dragged the ball narrowly wide, before being yellow-carded for a tug on Angola's Pirolito.

Manucho almost capitalised on confusion in the Moroccan defence but hammered wide, before his fellow attacker Mateus produced a fantastic cross for the Real Valladolid striker late on, which he should have buried, but managed to scuff wide with his head.

Both sides missed an opportunity to go top of the group, as the second draw of the day left Group A wide open.

The 2013 Nations Cup, meanwhile, awaits its first goal after 180 minutes of football.

"We played after the game between South Africa and Cape Verde and that gave us motivation to win.

"We virtually monopolised the first half. We created lots of chances but lacked success.

"We were not up against a phantom side - they have got strong strikers and woke up in the second half.

"It's a positive result for us, and we'll be trying to get a better one in our second outing and be sharper in front of goal."

"Before the tournament, we were the [second] weakest team in the group, according to Fifa's rankings.

"Now we've all come away with 0-0 draws and we [have] the same chances as before."