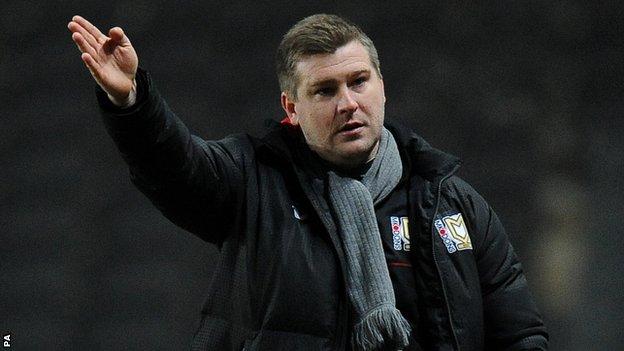 MK Dons boss Karl Robinson has confirmed he will meet chairman Pete Winkelman amid reported interest from Championship side Blackpool.

Following the 2-0 FA Cup third-round replay victory against Sheffield Wednesday it emerged that the 32-year-old's club had been approached.

He said: "All I do know is the chairman has asked for a meeting with me and I'll know the truth then.

The MK Dons route to the top

"I do believe something has happened but I don't know what it is."

The Tangerines had been without a manager after Michael Appleton ended his short spell in charge to move to Blackburn last week.

Their search to find a successor has so far proved troublesome after Bradford's Phil Parkinson turned down the chance to speak to them and new Bristol City boss Sean O'Driscoll supposedly rejected the post, although Dundee United have given permission for Peter Houston to begin discussions.

Former Liverpool coach Robinson has reached successive play-off semi-finals since taking over at Stadium MK in May 2010, with the latest highlight coming on Wednesday night as he oversaw a historic first qualification into the FA Cup fourth round.

"I didn't want to know anything before the game [about a Blackpool approach] because I think it's unfair to the football club," Robinson added.

"I'll show them [Blackpool] the respect they deserve but that doesn't matter what the decision is, I'll be in work as normal on Wednesday."

Robinson will face further competition for the post from Blackpool caretaker manager Steve Thompson after he confirmed his interest following the FA Cup defeat by Fulham.

He said: "It is something I want to be - I am ready to be a number one. But it is [chairman] Karl's [Oyston's] decision."