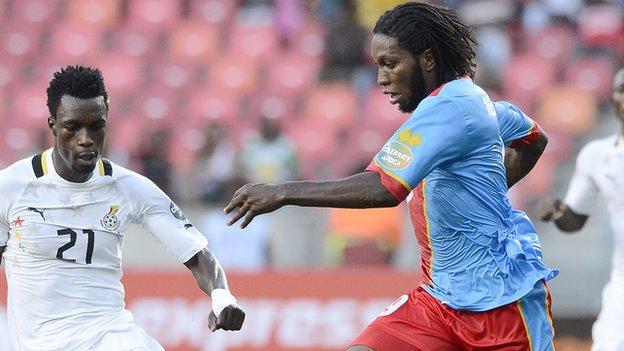 DR Congo came back from 2-0 down to deny Ghana victory in the first game of Group B at the Africa Cup of Nations.

Asamoah doubled Ghana's lead when he headed in at the far post but Tresor Mputu replied quickly for DR Congo, poking home from inside the box.

And DR Congo restored parity when Dieumerci Mbokani scored a penalty after being dragged down by his shirt.

It was a deserved point for DR Congo, whose build-up to the match had been marred by rumours that their coach Claude LeRoy had quit over a row about bonus money.

Sunday's Group B opener marked a record seventh appearance at the Nations Cup for DR Congo coach Claude LeRoy. A winner with Cameroon in 1988, the match against Ghana was his 29th Nations Cup finals game in charge

But the Frenchman was in place on the touchline to see his team make a bright start against the fancied Ghanaians.

Lomana Lua Lua came close to opening the scoring when his fierce drive from inside the box was brilliantly tipped against the bar by Fatau Dauda.

It was clear that Ghana, who had come into the tournament off the back off of 3-0 and 4-2 wins over Egypt and Tunisia respectively, were not going to have this all their own way.

Former Newcastle and Portsmouth forward Lua Lua was again in the action when he fired in a shot from the edge of the box, but this time Dauda was able to watch the ball drift harmlessly wide.,

Ghana coach Kwesi Appiah, hoping to lead his country to their first title since 1982, would not have envisaged the campaign starting the is way.

And he had more reason to be displeased when skipper Asamoah Gyan dragged a shot horribly wide having been played clean through by an excellent pass from Derek Boateng.

But at least it was evidence that the Black Stars would threaten.

And five minutes before half-time, it was Ghana who broke the deadlock with a goal worthy of being the first of the tournament.

Asamoah played a superb one-two with Badu to break into the box and he then pulled the ball back for Badu, who had continued his run to slide in and clip the ball into the net.

Just after the re-start, Ghana doubled their advantage when Asamoah ghosted in at the far post to meet a corner and head the ball in off the underside of the bar.

To their credit, DR Congo, in their first match at the Nations Cup football since 2006, responded quickly.

Mputu latched on to a ball into the box and finished brilliantly, using the outside of his boot to poke the ball into the far corner.

Sixteen minutes later they were given a chance to restore parity when Mbokani was dragged down in the penalty area by Jerry Akaminko, who had hold of the striker's shirt.

And the Belgium-based forward, who has scored 23 goals for his club this season, made the spot-kick look easy as he slotted the ball into the corner, with the keeper diving the wrong way.

A stunned-looking Ghana took a few moments to regain their composure - and when they did they could have regained the lead.

But twice in the space of four minutes they were denied by excellent saves from Robert Kidiaba, who first was equal to a shot from Gyan before then back-pedalling at pace to tip over a free-kick that was sneaking in under the bar.

Then at the other end it took an equally brilliant save from Duada to prevent DR Congo snatching a breathtaking victory as he dived low to his left to push Youssouf Mulumbu's shot around the post.

"This match was a great advertisement for African football.

"I'm proud of my players. They have great quality and they showed it by coming back to a high level competition like the Africa Cup after a seven year absence.

"We deserved this result after all the problems we had and I hope that it will get the whole country behind the team now."

"I knew this match would not be easy, but it was unfortunate we did not win our first game.

"We relaxed and we suffered from some tactical indiscipline, which we must correct in our next game."