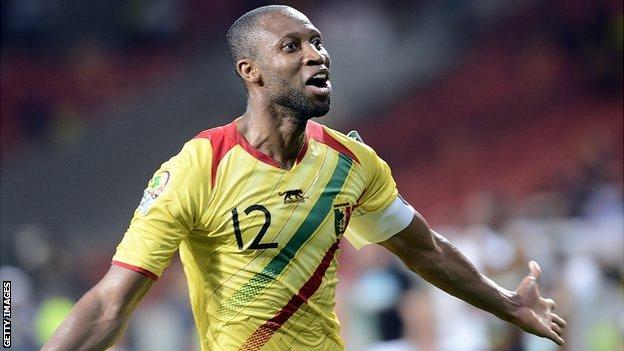 A late goal from captain Seydou Keita gave Mali a victory over Niger and the first win of the Africa Cup of Nations.

The former Barcelona midfielder slotted in with six minutes remaining, after the game looked to be heading for a fourth draw of the finals.

The win takes Mali to the top of Group B, after Ghana and DR Congo had earlier drawn 2-2.

In a game that failed to sparkle for long periods, the Eagles - inspired by Keita - enjoyed much of the possession and largely deserved their victory.

Mali signalled their intent from the off, with big striker Cheick Tidiane Diabate rifling in a couple of efforts from the edge of the area and warming Kassaly's hands.

Mali keeper Mamadou Samassa, winning only his second cap, sent Malian pulses racing at the other end as he came for and completely missed a floated corner, which, fortunately for him, sailed over everyone else.

The Eagles are regulars at Nations Cup finals, but have yet to win the title. They were runners-up in 1972 and came third last year in Equatorial Guinea and Gabon, a record they will hope to improve on in South Africa

Eagles winger Mahamane Traore hassled the Niger defence, breaking into the box before pulling it back for Cheick Fantamady Diarra, who fired over from 12 yards.

Traore tested Kassaly with a couple of floated corners, with the Nigerien keeper looking less than comfortable, before Mahamadou Ndiaye met a Sigamary Diarra corner with a header, which flew wide.

At the other end a well delivered Nigerien corner caused a scramble in the Malian box before Koffi Dan Kowa's shot was denied by a brilliant block from Adama Tamboura.

Mali then swung in another free kick, which Kassaly just managed to get enough on to make it awkward for Cheick Fantamady Diarra at the far post, with the Rennes forward nudging it wide from close range.

The Eagles enjoyed plenty of possession throughout the first period, but struggled to convert it into real chances.

Nice midfielder Mahamane Traore attempted to do so approaching the break, firing in a thumping drive from 20 yards that fizzed just past Kassaly's post.

The second period started much brighter, with substitute striker Mamadou Samassa doing his best to make an instant impact, but dragging his effort wide of the near post from 20 yards.

Niger's defeat to Mali is their fourth successive loss at the Nations Cup finals. They made their tournament debut in 2012 - losing all three group matches

Keita then began to increase his influence on the game, breaking well towards the area, before unleashing a fierce strike, which was palmed away well by Kassaly.

Nigerien attacker Modibo Sidibe then broke through the Malian defence, before forcing Samassa to cut out the chance smartly at his feet.

Former Liverpool midfielder Momo Sissoko was introduced just after the hour mark, making his return to the Nations Cup after a three-year absence from the national squad.

His fellow substitute Samassa weaved through the Niger defence well, only to slam his effort into the side-netting.

Entering the final quarter, the game opened up, as Mali chased a winner and Niger attempted to add to their record of a single goal at the Nations Cup finals.

They almost did so, but instead missed a good opportunity to take the lead from a corner, as Moussa Maazou powered a header over, when he should have hit the target.

Keita almost broke the deadlock with 13 minutes to go, after a lovely lay-off from Samassa teed him up to stroke the ball beautifully towards the top corner, only to see it come off the crossbar.

His team-mate Mahamane Traore headed over from six yards, while at the other end, Mohamed Soumaila scuffed his shot, which Samassa collected easily.

Keita then finally broke the deadlock, stroking home with his left foot, after Kassaly fumbled Diawara's floated cross in from the right, to give the Malians all three points.

"It was a difficult game against a very defensive team like Niger.

"But I'm happy for the players because they have worked hard and this win will boost confidence for the next match against Ghana."

"We tried our best against a top team like Mali.

"My players have great fighting spirit and big hearts, so you can be happy even when they lose."