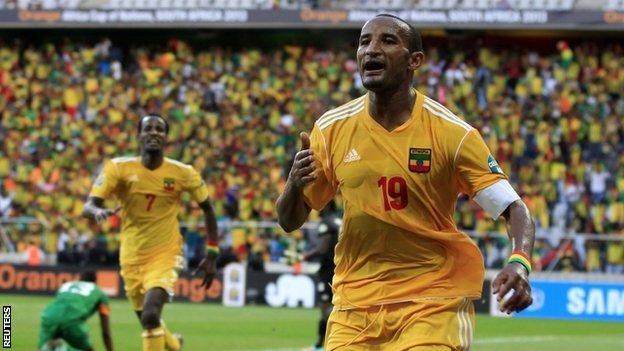 Champions Zambia were held to a 1-1 draw by 10-man Ethiopia in an eventful Group C opener at the Africa Cup of Nations in Nelspruit.

Zambia striker Collins Mbesuma opened the scoring on half-time, after being played in by Isaac Chansa.

But Antelopes striker Adane Girma equalised after the break, with a clinical right-footed strike.

Saladain Said earlier missed a penalty for the Ethiopians, before keeper Jemal Tassew was sent off for a wild tackle.

The Ethiopians showed no signs of nerves on their return to the finals after a 31-year absence, preventing the Chipolopolo from settling into the game and responding with their own passing game.

Zambia's defending was found wanting for long periods, as they failed to make the most of their numerical advantage against an Ethiopian side who deserved their point.

Antelopes back on target

Ethiopia's equalising goal against Zambia was their first at the Nations Cup since 1976. They failed to score in their last appearance in 1982

New Reading defender Stopilla Sunzu picked up the game's first card for a wild challenge on Ethiopia danger man Said, setting the tone for a game that would see some heavy challenges and several cards handed out.

Said almost punished a mix-up in the Zambia defence, racing past defender Joseph Musonda, whose poor attempt at a clearance allowed the striker to lob over onrushing goalkeeper Kennedy Mweene, only for the ball to bounce over the crossbar.

Said got his reward for continuing to press the champions' defence by being hauled down in the box by defender Chisamba Lungu to win a penalty, but was unable to convert the spot-kick, his weak effort palmed away by Mweene after diving to his left.

The Ethiopian keeper then produced his moment of madness, clattering into Lungu after racing 40 yards from goal to bring down the onrushing defender, who had been played clean through.

The keeper was carried off on a stretcher but received a straight red card for the reckless lunge, with referee Castane Otogo showing no sympathy for the wild challenge.

Missing from the spot

The champions immediately attempted to press their numerical advantage with Rainford Kalaba attempting to link up with Mbesuma, only for the striker's header to fly wide.

Mbesuma then managed to find the breakthrough. He was played through by a clever headed flick-on from Chansa, before coolly knocking it past substitute keeper Zerihun Tadell from close range.

Ethiopia continued to stick to their game-plan after the break, playing the ball out from the back, despite their one-man disadvantage.

Zambia - who had picked up three bookings in the first half, with Sunzu, Joseph Musonda and Lungu all given yellow cards - tried to take advantage of their numerical supremacy, with Katongo and Mbesuma both firing wide.

The Ethiopians, however, hit back deservedly just after the hour mark, with a wonderfully worked goal. Substitute Addis Hintsa began the move with an incisive through ball with his first touch, before Said played in Girma, who crashed in off the near post, sending the 3,000 Ethiopians in the ground wild.

Mbesuma's attempt to immediately reply for the Zambians was thwarted, as he was booked for a dive in the penalty area, when Aynalem Hailu looked to have a hold of his shirt.

The Orlando Pirates striker then forced a good save from Tadele, who got down well after the Zambian forward dragged a low shot towards the bottom corner.

The holders failed to find a winner, despite keeping up the pressure late-on, with the Ethiopians hanging on for a well deserved draw.

"I would like to congratulate Ethiopia for a very good performance. I'm not surprised. I said 'be careful of this team, they are able to play very good football'.

"Today, we have to thank our goalkeeper - without Kennedy Mweene it could have been a very, very bad result.

"Our fans expected more than we did today, and they are right. Today, it was the fault of the coach.

"I did not prepare the team well to start the competition - we'll see how things go after the third game."

"I'm happy as we missed a penalty and drew. This is our first experience after 31 years so, as you see, it was fantastic.

"The players have shown their characters and shown the rest of the world they can play football.

"The goalkeeper also has to defend. He went to defend the ball, and shouldn't have been red-carded."