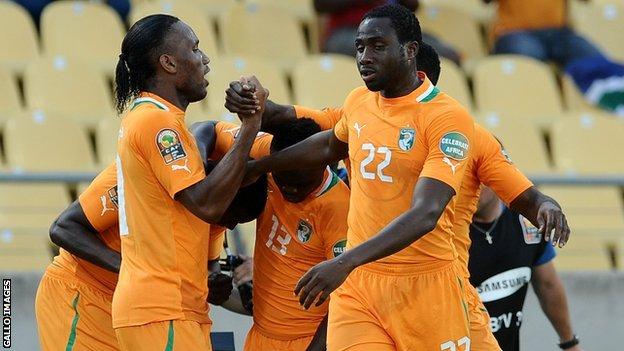 Gervinho scored a late volley to give Ivory Coast victory in the first Group D game at the Africa Cup of Nations.

Yaya Toure put the Ivorians ahead with a deflected shot from 12 yards and he almost doubled his side's lead when his fierce drive hit the post.

Togo fought back to restore parity just before half-time, Jonathan Ayite sweeping in a corner from the right.

But Arsenal forward Gervinho met a free-kick to the far post with the outside of his boot to clinch the win.

Despite going into the game - and the tournament - as favourites, Ivory Coast made a surprisingly slow start and were almost behind after only three minutes.

Kolo Toure missed his kick when attempting a backpass and gifted possession to Emmanuel Adebayor, but the striker could not take the ball around keeper Boubacar Barry, who nicked the ball away brilliantly.

It was a big miss from Tottenham's Adebayor, who could have put his controversial build-up to the tournament behind him in the best possible way.

Instead it was another English Premier League-based star who struck the first blow, Manchester City midfielder Yaya Toure opening the scoring with a shot that flew in via a deflection.

The goal settled the Ivorian nerves and through the imperious Yaya Toure and the wide players Gervinho and Max Gradel, they began to take control.

Togo, meanwhile, were reduced to long-range efforts, with Serge Gakpe eager to try his luck at every opportunity.

Physical battles all over the field - notably between Kolo Toure and Adebayor and Vincent Bossou and Didier Drogba - made for a scrappy game which was continually interrupted by fouls.

When Yaya Toure did manage to produce a piece of quality, his shot from the edge of the box smashed back off the post.

In contrast, it was a bizarre free-kick that led to Togo's equaliser as a 40-yard effort bounced out for a corner. From the poorly delivered set-piece, Ayite swept the ball home after it had evaded everyone at the near post.

The goal was a shock to the Elephants, who did not concede a single goal in normal play at the 2012 tournament as they went all the way to the final, where they lost on penalties to Zambia.

But it did not seem to wake them from a lethargic performance, typified by Didier Drogba - playing in his sixth Nations Cup - whose most memorable contribution was a free-kick that may go down as the most off-target effort of the tournament.

His team-mate Didier Ya Konan was more accurate with a near-post drive but keeper Agassa got down well to keep the shot out.

Togo threatened infrequently, although they did put the ball in the net through Dare Nibombe - but his header was ruled out because it was deemed the Sparrow Hawks had taken a corner too quickly.

At the other end, Yaya Toure shot at Agassa after good work from Arsenal forward Gervinho.

Just as it seemed the game would end in the sixth stalemate of the tournament, Gervinho ghosted in at the far post to meet Yaya Toure's excellent free-kick and produce a clinical finish.

Right at the end, Ivory Coast keeper Barry pulled off a superb save to keep out Floyd Ayite's header and ensure the Elephants took all three points.

"I was expecting something better from us - it wasn't our best performance. I thought the first match was going to be difficult, but it was much harder than I envisaged.

"I'm happy with the win, but we made too many mistakes, and will have to use this game as a lesson."

"I think my team deserved something else than that. It wasn't right (to disallow our goal) - the rules weren't respected."