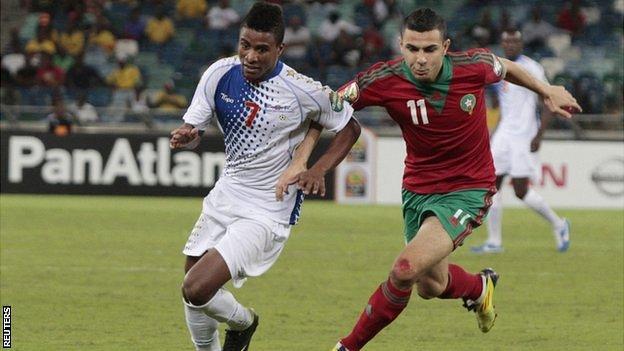 Cape Verde were denied an historic Africa Cup of Nations upset, after Morocco levelled to draw 1-1 in Durban.

The debutants had dominated the former Nations Cup winners for long periods.

Lucio Antunes's side - who are the smallest nation to play at a Nations Cup - took the game to the Moroccans from the outset.

The Blue Sharks prevented their opponents from settling into a rhythm, with the Atlas Lions limited to a snatched shot from distance from Abderrahim Achchakir, which Vozinha in the Cape Verde goal palmed away comfortably.

We are still alive. I am very happy with this result, a great one for our country

Striker Julio Tavares repeatedly harried the Moroccan defence, determinedly winning the ball 40 yards out with a sliding tackle, only to drag his shot well wide.

The North Africans were forced into conceding several free-kicks in dangerous areas under pressure. Cape Verde forward Ryan Mendes drove one on target, which Lamyaghri parried away well.

Morocco attempted to counter and bring playmaker Younes Belhanda into the game, only for the Montpellier man to be caught offside.

The debutants kept up the pressure, with Mendes and Nivaldo again getting forward well, but their efforts were thwarted by Lamyaghri once more.

The pressure paid off 10 minutes from the break, with Mendes bursting forward again and slipping the ball through to Platini, who deftly chipped over the onrushing Lamyaghri to open Cape Verde's Nations Cup goal-scoring account.

Lucio Antunes' side began the second period where they left off before the break, pressing the Moroccan defence, with Fernando Varela whipping in a smart cross for fellow centre-back Nando, who headed over.

We did not underestimate our opponents, but we took time to adapt to their style and made individual mistakes

El-Arabi immediately attempted to find a way through the solid Cape Verde defence, but was caught offside.

The Moroccans began to show their frustration just an hour in, with Belhanda booked for showing his studs in a lunging tackle on Tavares. The Montpellier man was then taken off after an indifferent performance, replaced by Kamal Chafni.

Morocco began to create more chances, with Mounir El Hamdaoui attempting to provide a final ball on a couple of occasions, only for the Cape Verde defence to clear.

But the North Africans finally found a way through on 78 minutes, with Barrada breaking into the area on the right and cutting back for El-Arabi, who stroked it home clinically.

Substitute Heldon almost responded straight away for Cape Verde, dragging his shot too close to the Moroccan keeper.

El-Arabi then almost put the Moroccans ahead at the other end from a corner, with his header flying past the far post.

Morocco continued to threaten late on, with Chafni drilling one from outside the box, which flew just wide.

The result puts Morocco and Cape Verde on two points apiece in Group A, behind hosts South Africa, who lead the group on four points, and ahead of Angola, who trail with one point.

"We [got] another draw, but we are still alive.

"I am very happy with this result, a great one for our country.

"My players worked very well and proved they have qualities."

"We did not underestimate our opponents, but we took time to adapt to their style and made individual mistakes in the first half.

The second half was better and I have hope for the next game."