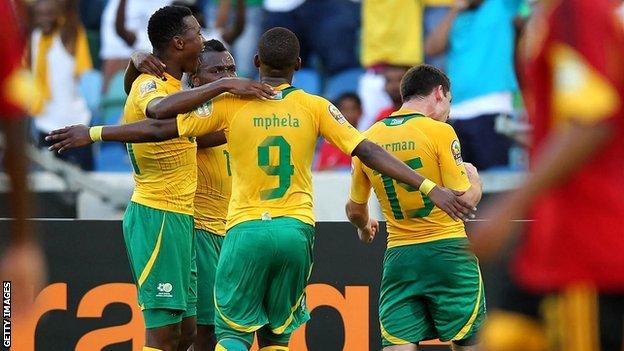 South Africa got their Africa Cup of Nations campaign on track with a much-improved performance to secure victory against Angola in Group A.

Centre-back Siyabonga Sangweni volleyed in at the far post to score Bafana Bafana's first goal of the tournament.

The hosts, who drew 0-0 with Cape Verde in their opener, dominated against Angola yet lacked a cutting edge.

But South Africa got a second goal when Lehlohonolo Majoro slotted past the keeper from a tight angle.

Majoro started on the bench, one of five changes to the team line-up following South Africa's disappointing display on Saturday, and had been on the pitch for only two minutes when he scored.

Katlego Mphela was among those to be drafted in from the start, with coach Gordon Igesund hoping the striker would provide some much-needed threat up front in a team that has long been struggling to score.

But, while the tournament hosts started with more urgency and drive, their problems in front of goal were again apparent.

Bafana Bafana captain Bongani Khumalo failed to get his head to a cross when he looked certain to score and Tokelo Rantie twice shot off target when well placed. Mphela's most dangerous moment was snuffed out by keeper Lama, who tipped the ball away from the striker's feet.

Angola, meanwhile, were starved of the ball and looked horribly short of quality.

Just as Igesund started to look agitated on the touchlines, South Africa finally made the breakthrough.

Centre-back Sangweni showed the forwards how to finish as he volleyed in smartly at the far post after Angola defender Lunguinha's header had looped into his path.

It was the first goal in more than three and a half hours of football in Group A.

Angola threatened to add to the goal tally shortly after when Manucho rose to meet a corner but Bafana goalkeeper Itumeleng Khune managed to beat the ball away.

Manucho, a former Manchester United striker, was involved again moments later when he headed back across the goal only for Mateus to smash the ball high and wide.

Perhaps buoyed by those moments, Angola made an immediate attack after the break, with Mateus pulling the ball back for Guilherme Afonso, whose low, first-time strike was well held by Khune.

But when they came forward again they were left exposed at the back and, after a quick counter-attack, Dean Furman curled in a low shot that Lama did well to push around the post.

If that was a warning, the sucker punch did not take long to arrive. Majoro latched on to a ball over the top, evaded one half-hearted challenge and then embarrassed the keeper at the near post with a fairly tame shot.

South Africa had a good chance to add a third when Bernard Parker crossed for Majoro but this time he could not provide the finish.

Angola, who have never beaten South Africa, had an opportunity to make the last few moments uncomfortable for the hosts but Manucho twice headed straight at Khune.

"I gambled today because it was a must-win situation. We had four defenders, one holding midfielder and the other five players were committed to attacking.

"The players believed in themselves - the nerves that affected us so much against Cape Verde were gone. It was not easy out there on the pitch with the weather so hot."