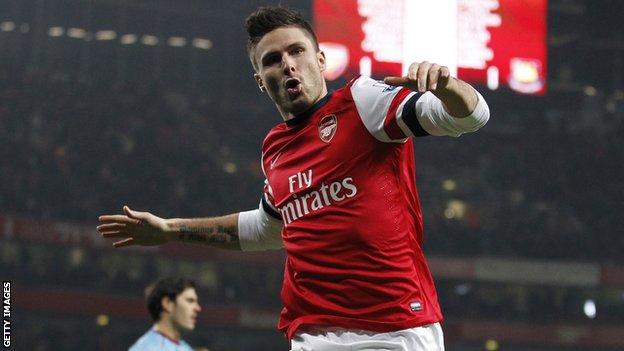 Arsenal produced a scintillating attacking display to record a first league win of 2013 in emphatic fashion with victory against West Ham.

But an entertaining game was marred by an injury to West Ham's Dan Potts.

Olivier Giroud poked in and Santi Cazorla's back-heel made it 3-1. Theo Walcott then fired in from a counter before Giroud side-footed home.

There was concern for West Ham towards the end of the second half when 18-year-old substitute Potts needed lengthy treatment on the pitch before he was carried off on a stretcher.

Arsenal remain sixth but cut the gap on fourth-place Tottenham to four points, while West Ham are 12th.

Back in April 2007, West Ham became the first side to beat Arsenal at Emirates Stadium when a solitary Bobby Zamora strike gave them a 1-0 victory.

For a brief spell, it looked as though a repeat of that scoreline might have been on the cards when the Hammers took an 18th-minute lead courtesy of a fine strike by Collison.

A corner was only cleared as far as the edge of the Arsenal area where Collison charged in to smash a half-volley beyond a stranded Wojciech Szczesny.

Barely four minutes later an equally stunning strike from Podolski drew Arsenal level as Jack Wilshere found the German in space around 25 yards from goal and he drove the ball into the bottom-right corner of Jussi Jaaskelainen's goal.

Play continued to swing from one end to the other after that and a tremendous burst of pace from Walcott should have brought Arsenal's second, but his cross was cleared by James Tomkins.

Arsenal were piling on the pressure and had another great opportunity midway through the half when a lovely move ended with Podolski prodding a shot towards goal but Joey O'Brien was well placed to clear off the line.

Aaron Ramsey then did likewise at the other end of the pitch when the Welshman lashed Carlton Cole's goalbound effort away to safety after the West Ham striker had peeled away from the Arsenal defence.

Barely two minutes into the second half and Arsenal were ahead. Walcott sent a corner towards the near post and Giroud ghosted in to stab a volley into the net.

From then on Arsenal were rampant and for the next 10 minutes almost every attack resulted in a goal.

First, Giroud and Podolski combined to set up Cazorla, who cheekily back-heeled the ball beyond Jaaskelainen and just one minute later Walcott was picked out at the far post by Podoloski's low cross and he rifled the ball home.

A stunned West Ham conceded a fifth just before the hour when Giroud poked in from Podolski's ball.

Much to West Ham's undoubted relief, the pace of the game settled down after that, although Arsenal often looked capable of adding another goal whenever they attacked.

There was a break in play midway through the second half when Potts took a heavy knock and needed treatment for 10 minutes before he was stretched off the pitch.

By that stage, West Ham had used all their substitutes, meaning they had to play the remainder of the match with 10 men.

Due to the earlier injury to Potts, 12 minutes of injury time were needed after the 90 minutes were up and unsurprisingly Arsenal dominated with the man advantage.

Substitute Alex Oxlade-Chamberlain saw a shot blocked, before Cazorla's effort was tipped wide by Jaaskelainen, but no further goals were forthcoming before the final whistle.

Arsenal manager Arsene Wenger said: "West Ham defended very well in the first half, we looked dangerous but couldn't finish our chances. We came out in the second half and attacked with tremendous pace. The injury to Dan Potts was the end of the game really but until that moment we played very well.

"In the Chelsea game there were a lot of positives, it was disappointing to lose, but we took the positives and transferred that into to this game.

"You want to be at your best every single game but we have many new players and it takes some time to get to know each other very well and I think that understanding is getting better."

"We could say we could defend better but I thought they hit the ground running.

"The encouraging thing for them was that we switched off for one corner and that lifted them. In the first half we defended exceptionally well but that 10 minutes blew us away."