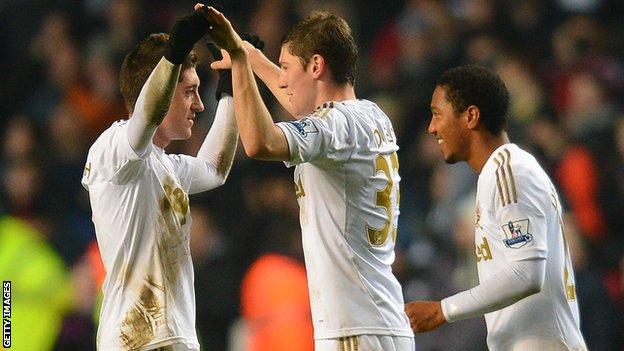 Swansea City are into their first major Cup final after holding 10-man Chelsea to a scoreless draw in a controversial Capital One semi-final second leg at the Liberty Stadium.

The result gave them a 2-0 aggregate win, but was marred by the sending off of Chelsea's Eden Hazard after he appeared to kick a ball boy.

The Belgian midfielder was dismissed in the 80th minute after an incident behind the home side's goal.

"What a fantastic night for all concerned at Swansea City and they thoroughly deserved it. Chelsea came here needing to score two goals but never looked a serious threat all night. It is thoroughly deserved for what they've done as a club over the last two years."

The Swans face League Two Bradford in the final at Wembley.

Hazard's red card came after he tangled with a ball boy, who was slow getting the ball back into play. He appeared to lay on the ball and TV replays showed Hazard kicking him.

But the incident failed to take the edge off the celebrations at the Liberty Stadium, as the crowd sang their approval of Swansea's stubborn resistance.

It was in stark contrast to the Chelsea players, who trooped off heads down as the party started around them.

The result piled more pressure on interim manager Rafael Benitez as his side failed to maintain their recent good away form.

Like the first leg they had plenty of possession, but failed to turn it into a goal.

No one summed up Swansea's determination better than Michu. His industry was exhausting to watch as he ploughed a lone furrow up front and chased every lost cause.

Small wonder the Swansea management were delighted when he signed a one-year contract extension before the game.

Benitez made a statement before the game, dropping Fernando Torres to the bench with Demba Ba leading the attack.

Swansea, who were last in a major semi-final in 1964 when they lost 2-1 in the the FA Cup to Preston North End, welcomed back Chico Flores with Leon Britton coming in for Itay Shechter.

The game took off in the seventh minute when Ba went down under a challenge from Ben Davies claiming a penalty, but got only a corner for his trouble.

The Swans broke quickly at the other end with Jonathan de Guzman's goalbound shot brilliantly blocked by Cesar Azpilicueta, while Petr Cech had to save after Michu was put through on goal.

Chelsea hit back with Gerhard Tremmel forced into saves from Oscar and Ramires, though Gary Cahill went closest with a free header cleared off the line by Angel Rangel.

Ba blasted over just before the half-time whistle, which the Swans were happy to hear.

And the Senegalese striker was quickly into action after the break, curling a shot just past Tremmel's left-hand post.

Chelsea continued to probe, but their frustration grew and boiled over when Hazard tangled with the ball boy after another attack petered out.

Chelsea's threat evaporated, and it was the Swans egged on by a euphoric crowd who finished the stronger, with Nathan Dyer forcing a superb save out of Cech.