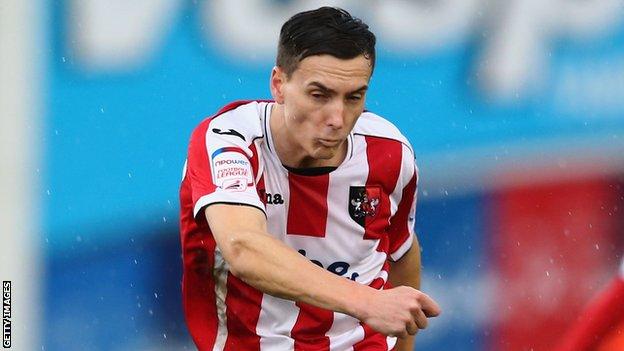 Gow came on at half-time and won the late penalty which he converted to seal the draw with their Devon rivals.

"It was a heavy pitch and for Alan to run round, especially in that first half an hour, it was a barrage out there," Tisdale told BBC Radio Devon.

"It was the right thing for him to play him in the second half and he proved that with his performance."

Gow has scored four goals this season and, since returning to the starting line-up in November after injury, Exeter have won eight and lost just two of the 13 games he has started in.

The Scot started just once between 8 September and 27 October, and in that 11-game period Exeter lost six times and won three games.

"Alan was going to come on at half-time if we were winning, losing or drawing, although I'd liked to have got to half time at 0-0. That was the plan, that was the hope."

City lost striker John O'Flynn in the first 10 minutes to a hamstring injury before going behind to a Rene Howe penalty after 15 minutes.

"I'm pleased we've come from a goal down in difficult circumstances against a team desperate to hang on with no number nine on the field," Tisdale said.

"We had to alter our plan and shape and pattern at half-time and the players did extremely well in the second half.

"I like the fact that they're a bit grumpy in the dressing room because they wanted to win and felt they could win as they were good enough.

"It was tough ask to come back into the game, but it's a point and I had to remind them that it's not a bad point."