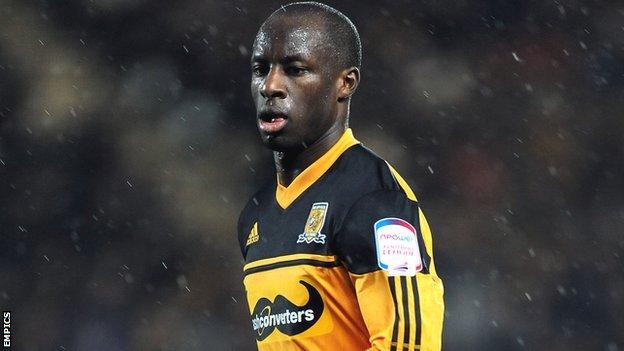 Hull City boss Steve Bruce fears forward Sone Aluko could be out for two months with an Achilles injury.

The 23-year-old Nigeria international has scored eight goals in 24 appearances this season.

Bruce told BBC Radio Humberside: "It looks as if he has a small tear in his Achilles and he's going to be in a boot for the best part of four weeks.

"It is going to be the best part of six to eight weeks before he is back and it is a major concern to us."

He added: "He has been paramount to the way we have played so it is a horrible blow.

"We'll be trying our utmost to try and bring someone in now."

The Tigers boss also revealed the club have submitted a bid to bring Fulham keeper David Stockdale back to the KC Stadium on loan.

Stockdale, 27, made five appearances for the Championship promotion chasers before being recalled by the Cottagers in December.