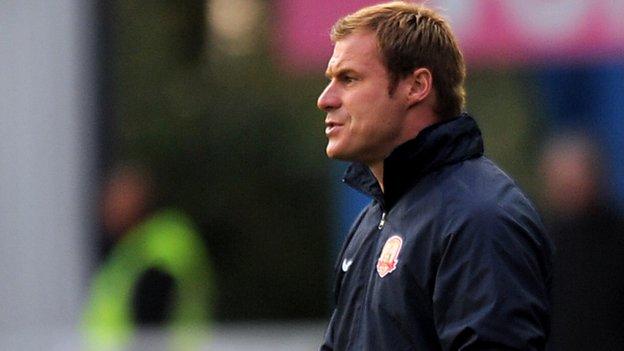 New Barnsley boss David Flitcroft is hopeful of signing a "renowned striker" to help their fight against relegation.

The 39-year-old was appointed manager until the end of the season on Sunday, after winning two of his three games in caretaker charge following the sacking of Keith Hill.

He told BBC Radio Sheffield: "It is a case of finding a renowned striker who can score the goals to keep us up.

"We know we haven't scored enough goals so that is a potential target."

Flitcroft added: "There are some good players out there who could benefit this team and this squad.

"We have touched base with a few managers and there are deals in the melting pot and now it is about getting the right player."

The Reds are the second lowest scorers in the division with 28 goals from 27 games, one more than Saturday's opponents Ipswich Town, and saw top scorer Craig Davies move to Bolton earlier in the month.

Meanwhile, Flitcroft admitted that the performance in the 2-0 win over Leeds on Saturday was instrumental in getting him the job.

"Certainly before the game I didn't think I was in the hot-seat for the job," he continued.

"I think the terms of the game with how the boys played and fought for myself and for the fans meant you could sense a shift in momentum.

"I'm just looking at the mission to keep Barnsley in this division and that is something I will go all out to achieve."

The Oakwell side are 23rd in the Championship, four points adrift of safety with 19 games to play.