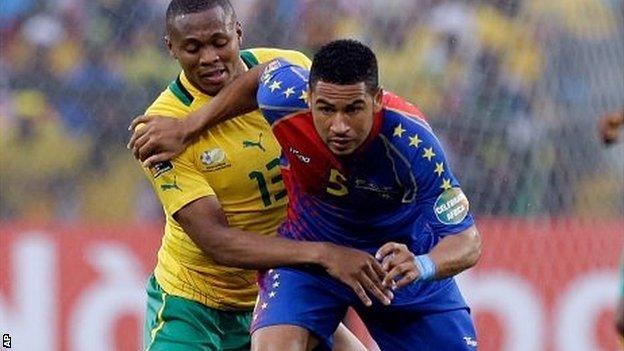 Hosts South Africa played out a disappointing goalless draw with newcomers Cape Verde in the opening game of the 2013 Africa Cup of Nations.

Bafana Bafana struggled to overcome their tag as a side who struggle to score goals, failing to create clear-cut chances in the Johannesburg rain.

Cape Verde had the best opportunity of the game, with striker Platini dragging his close-range shot badly wide.

The result, however, gives the Blue Sharks their first Nations Cup point.

South Africa coach Gordon Igesund, who kept his team selection a closely-guarded secret before kick-off, opted for newcomer Lehlohonolo Majoro to start up front instead of the more experienced Katlego Mphela.

The home side's midfielder Siphiwe Tshabalala set the tone early on, shooting his free-kick straight at Cape Verde goalkeeper Vozhina, who initially spilled it in the slippery conditions, before gathering.

Cape Verde then carved out what would prove to be the best goal-scoring chance of the match, with Platini finding himself clean through on goal, only to drag his shot badly wide, when he should have done much better.

The wet conditions played their part in a mainly scrappy first half, with South Africa struggling to link up play between midfielders Thuso Phala and Tshabalala and strikers Bernard Parker and Majoro and Cape Verde's main attacking threats Heldon Ramos and Ryan Mendes unable to find the target.

Both sides found themselves restricted to long-range efforts, with South Africa's Thuso Phala and the Blue Sharks' Mendes and Babanco floating their free-kicks off target from outside the box.

Tshabalala then lobbed one high to the far post, only for Phala to stab it wide. Mendes replied by slicing his close-range effort high and wide, after gathering at the far post from a corner.

The hosts, seeking their first Nations Cup win since 2004, continued to pump long balls up the pitch, rather than play through midfield, with Cape Verde centre-backs Fernando Varela and Nando dealing with them comfortably.

Igesund responded to the stalemate at the interval, taking off Crystal Palace midfielder Kagisho Dikgacoi for Lerato Chabangu, whose first contribution was to try an ambitious overhead kick, which flew off-target.

Cape Verde on the rise

Cape Verde Islands, with a population of just over 500,000 were actually ranked higher than their opponents in the Fifa world rankings (69 compared to 87).

Parker then burst through minutes later, before being stopped by Varela once more, prompting a penalty appeal from the home bench, which was correctly waved away by the referee.

The penalty shout upped the tempo of the game, which briefly became niggly, with Platini going in the book for pushing over South Africa goalkeeper Itumeleng Khune, before being replaced by Julio Tavares.

Helton went close to breaking the deadlock, with his header forcing Khune to scramble across his goal to push the attempt away to safety.

Bafana Bafana increased the urgency as they chased a winner - with Khumalo heading over from close range in injury time - but they failed to carve out an all-important opening, much to Igesund's disappointment.

Cape Verde - representing a group of islands, with a population of just over 500,000 - celebrated their first Nations Cup point enthusiastically on the whistle, while Igesund's side trudged off, pondering their fourth blank in five games.

"The guys were very, very nervous out there. I've never seen them like this.

"The first half was a complete waste of 45 minutes.

"We got a point. I don't think we deserve too much more than that, to be honest."

"I'm happy with the performance of the team.

"It [the result] means that our team has been well organised. Not conceding goals makes the team more confident."