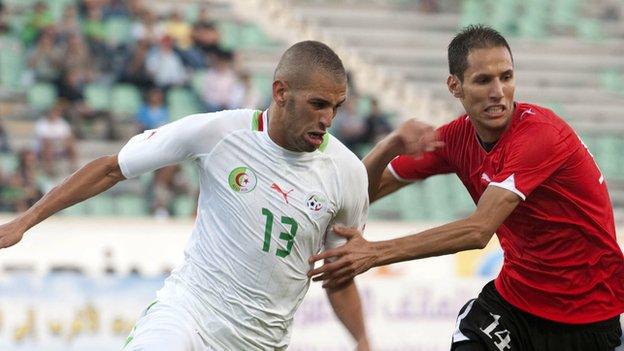 Algeria are Africa's second highest-ranked team in the eyes of world governing body Fifa - with the Desert Foxes breaking into the top 20 for the first time in November.

But they are arguably the most difficult of the 16 title challengers to fathom.

They have won the competition, been runners-up and collected bronze medals twice in 14 appearances, but they have also made five first-round departures and regularly fail to even qualify, as they did in 2012.

The North Africans reached the semi-finals at their last Nations Cup in 2010, a year when they returned to the World Cup after a 24-year absence following their successful policy of bringing players with dual nationality into the side - such as Madjid Bougherra and Mehdi Lacen among the current crop.

But the side that returns to South Africa will have a different look, with temperamental goalkeeper Faouzi Chaouchi's place having been taken by former Manchester United triallist Rais Mbolihi, while the likes of Karim Ziani, Nadir Belhadj and Antar Yahia have also been jettisoned.

Defences would also do well to keep an eye on CR Belouizdad striker Islam Slimani, who has already bagged five competitive goals, despite only making his debut in May.

"My squad is inexperienced but full of desire to do well. Although I am optimistic, it will not be a major surprise if we are eliminated after the opening round," said coach Vahid Halilhodzic.

"If we get to the quarter-finals you never know what can happen, but we have to get there first and it starts with a positive result from our outing against Tunisia."