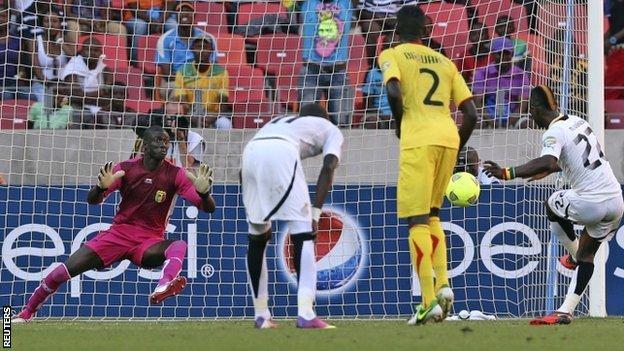 Ghana took a large stride towards the Africa Cup of Nations quarter-finals after beating Mali 1-0 in a tight Group B encounter in Port Elizabeth.

Mubarak Wakaso scored from the penalty spot after 38 minutes after Emmanuel Agyemang-Badu was felled in the box.

Seydou Keita flashed a free-kick wide for Mali after Ghana goalkeeper Fatau Dauda was lucky to stay on the pitch after handling outside his area.

Agyemang-Badu also hit the post in a game where Mali rarely threatened.

Mali will hope history can repeat itself, after the West Africans suffered their only group defeat in the 2012 finals against Ghana before going on to take third place - their best Nations Cup finish in 40 years.

The Black Stars - who are seeking their fifth Nations Cup title, but first since 1982 - know that victory against Niger in their final group game will guarantee them a place in the last eight. In Group B's other game, which will also kick off at 1700 GMT on Monday, Mali will face DR Congo.

A crucial moment came in the sixth minute when Dauda was only shown a yellow card by Ivorian referee Noumandiez Doue, despite sliding out of his area and clearly using his hand to stop the ball.

Seen praying on the pitch before the game, Dauda was further reprieved when former Barcelona star Keita deceived the keeper with his free-kick - only for the ball to whistle half-a-yard wide with the Ghanaian beaten.

That proved to be the closest Mali came to scoring as Ghana, who struggled to impose themselves in the opening half hour, gradually exerted their authority as the first half came to a close.

After Asamoah Gyan, Harrison Afful and Wakaso all tried their luck from distance without testing Mali goalkeeper Mamadou Samassa, Agyemang-Badu rose to superbly head Wakaso's deep free-kick against the post with 32 minutes on the clock.

If that was a warning, it was not heeded as Agyemang-Badu tumbled in the box minutes later following a crunching tackle from left-back Tamboura.

With his late mother having asked him to no longer take penalties for Ghana during regulation time, Asamoah Gyan - whose missed spot-kicks in the 2012 Nations Cup and 2010 World Cup had heralded his side's exit - ceded duties to Wakaso.

Sporting a bleach-blond streak down his head, the Espanyol winger coolly converted as Samassa failed to get a touch despite diving the right way.

But Wakaso earned his second yellow card of the tournament for his celebration, ruling him out of the Niger clash, although he was also carried off on a stretcher late on.

Mali coach Patrice Carteron brought on Modibo Maiga at half-time for ineffective midfielder Sigamary Diarra but the West Ham striker saw little of the ball despite playing in front of a midfield featuring Keita, Momo Sissoko and Samba Diakite.

Instead, Keita came closest again, just failing to latch onto a deep diagonal ball into the box after getting behind the Ghana defence.

Cheick Tidiane Diabate, who netted three times at last year's finals, wasted an even more promising opportunity after the hour as John Pantsil misread Sissoko's right-wing cross only for the Bordeaux striker to waste one of Mali's rare openings with a heavy touch.

After losing 1-0 to Nigeria in the 2006 finals, the Black Stars have scored in all nine of their group games since.

That was Mali's last decent opening as Ghana - who started their 2013 campaign with an entertaining 2-2 draw against DR Congo - created the better chances.

After defender Isaac Vorsah headed over from a corner, Samassa had to be alert to deny a long-range Agyemang-Badu free-kick before substitute Solomon Asante almost scored within a minute of coming on as he fizzed another effort from distance just wide.

Doue issued seven yellow cards throughout the match but Mali defender Mahamadou Ndiay, booked in the first half, was also lucky to stay on the pitch as the referee chose not to punish a poor tackle in stoppage time.

Ghana avenged their third-place defeat to Mali in last year's Nations Cup and will be satisfied with their first three points despite falling short of their best in a match attended by a desperately small crowd of 8,000.

The Eagles, meanwhile, will anxiously await the result of Thursday's second game between Niger and the Congolese before knowing what they need to do against the latter in their final Group B fixture.

"We were much more tactically disciplined in this game than against DR Congo, but I know we can do a lot better than we did today."

"The referee did not help us because he ought to have sent off the Ghana goalkeeper rather than just booking him for handling the ball outside his area.

"Ghana were better,especially in the first half, but we still have a game to qualify for the next round and so we will forget this match and focus on our next game."