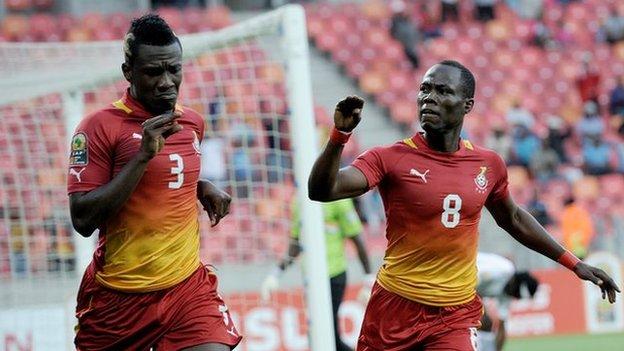 Ghana eased through to the quarter-finals of the Africa Cup of Nations by beating Niger to finish top of Group B.

Captain Asamoah Gyan was instrumental throughout and he set the Black Stars on their way when he controlled Albert Adomah's cross and the drove home.

Gyan then turned provider as he crossed for Christian Atsu, who chested the ball down before poking it in.

Ghana wrapped up the win when Gyan's header was parried by Daouda Kassaly and John Boye tapped in the rebound.

It was a comprehensive victory and a solid performance from a Ghana team that went into the game knowing they only needed a draw to make it through to the last eight.

Niger's hopes of progressing were slim and they were blown away by the pace and precision of the Black Stars, who clinched top spot in the group on seven points to set up a meeting with debutants Cape Verde.

The Nigeriens may look back on a goal that was disallowed with the score at 1-0 but the gulf in class between the sides was apparent and they can have no complaints about the result.

Gyan was a huge factor in Ghana's dominance, the striker rising to the challenge of captaincy - a responsibility that some had questioned whether he could handle before the tournament - to deliver a clinical and emphatic performance.

He put his side in front when he controlled Adomah's cross from the right with a deft touch and then lashed the ball beyond Kassaly.

Then came a moment that might have made life more difficult for Ghana, as Koffi Dan Kowa drilled in from six yards but had the goal ruled out as the referee ruled Moussa Maazou has pushed Ghana keeper Fatau Dauda.

It looked a harsh decision and deprived Niger of their first goal of the tournament.

But it is unlikely it would have affected the outcome as Ghana were by far the superior team and they reinforced their dominance soon after when Atsu made Niger pay for some poor defending.

After robbing Dan Kowa, he played the ball out wide to Gyan and carried on his run into the box where he collected his skipper's cross, evaded a comical challenge from a defender and slipped the ball into the net.

Under-fire keeper Kassaly did well to keep Agyemang Badu's shot out, diving to his left to push the ball round the post but there was little respite for the Niger stopper.

Four minutes after the break, he was picking the ball out of the net again. He kept out Asamoah's header on the goal-line but was unable to stop Boye pouncing on the rebound and tapping in.

With the game effectively over as a contest, the pace slowed and it was Niger who almost took advantage.

Maazou rose at the near post and should have done better with a header that he mistimed and sent off target. It was a rare offensive moment from Niger, who go home from their second Nations Cup without scoring a goal.

Ghana were also guilty of wasting a good chance to score when Adomah crossed to the far post for Gyan and the forward failed to get his foot over the ball, sending his shot well wide.

Not that it mattered for the Black Stars or Gyan, who was still given a rapturous reception when he was substituted soon after with his side already assured of their place in the knockout stages.

"We stepped up our game and won against a good Niger team. We hope to do better as we progress in this competition."

"I am proud of my players despite the loss. They displayed courage and the future is bright. We were up against a better, faster team today."