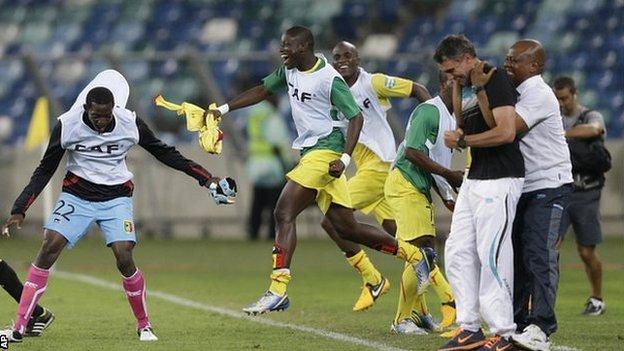 Mali came from behind against DR Congo to earn a point and progress to the Africa Cup of Nations last eight.

Claude LeRoy's side chased a winner but were unable to find a way through the solid Malian defence, as the Eagles joined Ghana in the quarter-finals.

It marks the Malians' second successive progression to the knockout stage, as they seek to better last year's third-place finish in Equatorial Guinea and Gabon.

It was DR Congo, however, who burst out of the blocks in Durban, chasing a win to progress.

The Eagles progress to their second successive quarter-finals appearance, as they aim to better their third-place finish last year

Striker Lomana LuaLua broke into the box and drove against the post from his team's first attack. Congolese forward Yves Diba followed up by darting into the area, before being tripped by Mali midfielder Momo Sissoko and winning an early penalty.

Mbokani coolly stepped up and fired the spot-kick high into the top right-hand corner past the diving Mamadou Samassa.

Sissoko responded with a snatched shot from the edge of the area, which was gathered by Robert Kidiaba in the Congolese goal.

The Malians managed to find their rhythm after the early shock and they were level on 14 minutes, after good work from Adama Tamboura, who forced his way through the Congolese defence on the left and squared for striker Samassa to finish from six yards.

The Eagles began to increase their hold on possession, with Seydou Keita delivering several threatening balls in the box, but his team-mates were unable to get on the end of them.

Keita then returned the favour, as he rugby tackled the DR Congo midfielder and was handed a yellow card.

DR Congo's elimination at the group stage marks the first time coach Claude Le Roy has failed to guide a team to the knockout stage, after six previous appearances with Cameroon, Senegal, Ghana - and the Leopards in 2006

The former Barcelona man delivered an inch-perfect ball for Modibo Maiga, who should have done much better from close range, but headed wide.

LeRoy made an attacking change at the break, as he chased another goal to put his side back into contention, bringing on Tresor Mputu Mabi for LuaLua.

The TP Mazembe man managed to increase his team's threat, as they played the ball around the Malian half well, attempting to create an opening.

Mali comfortably soaked up the pressure, knowing a draw would take them through, with midfielders Samba Diakite, Keita and Sissoko all providing good cover for their deep-lying defence.

Diakite and Sow ventured forward in an attempt to breach the Congolese defence, but were well cut out.

Kidiaba was almost caught napping, as he managed to spill Mahamadou Samassa's speculative effort, only to gratefully see it creep around his post.

Mulumbu forced a fingertip save from Kidiaba's opposite number at the other end, whipping in a curling shot, which Mamadou Samassa just tipped around his upright.

The Eagles then almost grabbed a winner, with substitute Kalilou Traore heading against the outside of the post from a Keita cross and his fellow replacement Cheick Diabate also hitting the woodwork, after rounding Kidiaba.

The Congolese had yet another penalty appeal turned down by the referee with five minutes left, as Mbokani went down after what looked a good challenge from Coulibaly.

Keita almost got a well-deserved winner at the death, but Kidiaba saved well, as the Malians got the draw necessary to earn them a last eight meeting with hosts South Africa.

"It was emotionally difficult knowing what was happening in the [Ghana] game and knowing we needed just a point.

"We need to keep up our intensity."

"We mastered the game but we didn't create enough chances. I want to congratulate Mali. I know that this win means a lot for the people of Mali.

"I know that Mali is going through a difficult moment right now, but they are not alone, in the Democratic Republic of Congo, we have many internal problems and people have died."