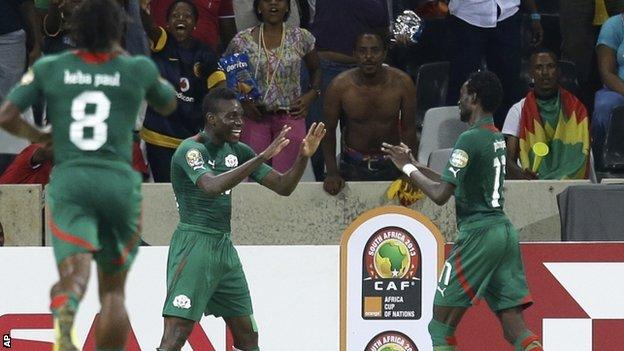 Burkina Faso's 10 men surged to the top of Africa Cup of Nations Group C, with an emphatic victory over Ethiopia.

The Stallions took the lead in the first half when striker Alain Traore gathered a clever ball over the top and blasted into the top corner.

Traore doubled their advantage on 74 minutes, driving home at the near post, before Djakaridja Kone made it three.

It was the first time Burkina Faso won a match at the Nations Cup away from home soil, finally succeeding at the 22nd time of asking in some style.

Burkina Faso's resounding 4-0 victory over Ethiopia is their first win in 22 Nations Cup matches. Their last came in 1998 on home soil, when they reached the semi-finals

The Ethiopians - who were well supported by thousands of their lively fans - had started the brighter and almost took the lead after just five minutes, with Shimelese Bekele sliding the ball past Soulama, only to see his effort rebound off the post.

The Ethiopians then suffered an early setback, as Adane Girma - the goalscorer in their opening 1-1 draw with Zambia - was taken off after going down in agony minutes earlier.

The Burkinabe tipped the balance of possession and found the back of the net on 20 minutes, with Wilfried Sanou slamming home a rebound from Ethiopia goalkeeper Zerihun Tadele, but was correctly adjudged offside.

The disallowed goal managed to spur on the Stallions, with Pitroipa - who had a man-of-the-match performance - just unable to get on the end of a sweeping ball from the right flank and Ethiopia defender Aynalem Hailu deflecting the ball just over the bar.

The Burkina Faso pressure paid off 11 minutes before the break, with Lorient striker Traore collecting wonderfully inside the box and finishing emphatically in the top left-hand corner.

The Ethiopians struggled to regain their early momentum, with Bekele getting on the end of a lofted ball over the top, but skying his effort high and wide, just before the break.

Striker Saladin Said attempted to regain a foothold for the Waliya Antelopes, striking a free-kick with power from 25 yards, but sending it too close to Soulama.

The Burkinabe keeper almost got himself in trouble as he tried to skip around Bekele in his own area and was nearly dispossessed.

But it was merely a warning for what was to follow, as minutes later Soulama handled a long Ethiopian punt upfield outside his area and was sent off by referee Bernard Camille, after much deliberation.

The Stallions then made a mockery of Ethiopia's numerical advantage, as Traore collected a deft flick from Pitroipa and smashed home with his left foot, to double his tally.

Djakaridja Kone made it three five minutes later, with Pitroipa again providing the assist, playing in the midfielder, who slid home at the near post.

Said tried to salvage some pride for Ethiopia with a thumping volley goalwards, which Diakite just managed to gather.

Provider Pitroipa then deservedly wrapped up a resounding win five minutes into injury time, finishing an inch-perfect pass from substitute Wilfried Balima beautifully to seal Burkina Faso's first Nations Cup win since they reached the semi-finals on home turf in 1998.

The result puts them ahead of Nigeria and Zambia in Group C, after the Super Eagles and Chipolopolo drew 1-1 earlier, and consigns Ethiopia to the bottom of the pile ahead of the final round of group games.

"When we scored (our first goal), it acted as a release.

"We played freely and with 10 players against 11, we did very well.

"This is great for our confidence. Everyone wanted to prove something.

"We are closer to qualifying, but we have to keep our feet on the ground."

"We weren't expecting this result, but anything can happen in football.

"I believe we still have a chance of qualifying."