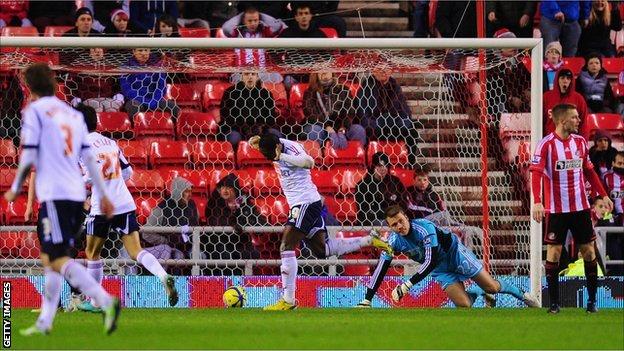 Manager Martin O'Neill has said Sunderland must change their mindset in cup competitions after the Wearsiders were knocked out by Bolton Wanderers in Tuesday's FA Cup replay.

Sunderland lost 2-0 on home turf, unable to repeat a comeback from two down as they had in the first game.

O'Neill told BBC Newcastle: "The very fact that it is 40 years since the club won the FA Cup might tell you things.

"This was an opportunity, to go out meekly is very disappointing."

Their last success in the competition came in 1973 and the 40th anniversary of that famous afternoon against Leeds at Wembley will be commemorated by the club in May.

Under Malcolm Crosby, who stepped in after Denis Smith's departure, Sunderland were losing finalists in 1992, while Mick McCarthy led his class of 2004 to within 90 minutes of the final before defeat by Millwall at Old Trafford.

Meanwhile, O'Neill's frustrations were deepened by the loss of striker Steven Fletcher through illness prior to the game, and the Northern Irishman was also disappointed by the efforts of members of the squad given an opportunity to impress.

"This is the whole idea of this game, that a club of this size, we've got to be able to have players who can come into the squad and do a job," he added.

"We should be able to cope with the loss of Steven Fletcher, and it's a competition that means a lot to us."