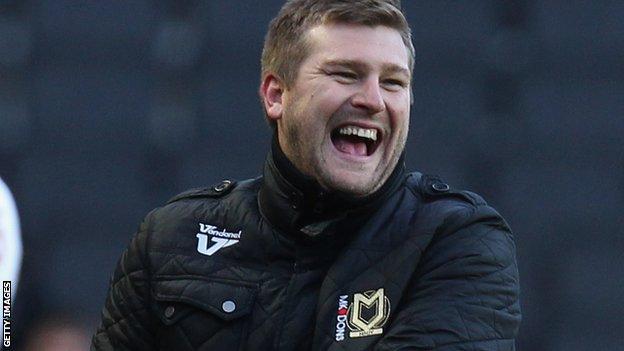 MK Dons have rejected an approach from Blackpool to speak with Karl Robinson about their managerial vacancy.

Blackpool are searching for a successor for Michael Appleton, who

Speaking after Robinson said he would

But the League One club have released a statement confirming that they have turned down the approach.

It read: "It comes as no surprise that Karl's name is once again touted for one of the top managerial positions in the Championship as his bold and stylish brand of football has invited plenty of talk in the industry.

Finished fifth in League One twice, currently sixth in 2012-13

"Since being appointed, Karl has guided our side to back-to-back play-off campaigns, broken a number of club records, and only yesterday he created history by leading our club into the fourth round of the FA Cup for the first time.

"Karl is an ambitious, bright young manager and he is firmly focused on realising MK Dons' dream of Championship football.

"Following discussions between Karl and the chairman, the club have turned down an approach from Blackpool to speak to Karl regarding the managerial vacancy at Bloomfield Road.

"Karl remains committed to the players, staff and, most importantly, the fans at Milton Keynes Dons, and will be looking to take the club from strength to strength by continuing to write new chapters in its history books."

to speak to Blackpool about the job, while the Championship club have confirmed that shortly before he was named as head coach of struggling Bristol City.

Robinson, 32, has been the youngest manager in the Football League since he was appointed by MK Dons in May 2010.