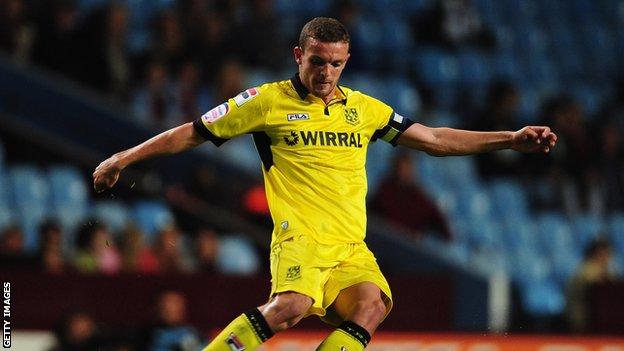 James Wallace is fully committed to Tranmere and is not looking to leave the League One leaders.

Some Rovers fans feared his outstanding early-season form would result in the 21-year-old midfielder moving to a higher division in January.

But the ex-Everton youngster told BBC Radio Merseyside he wants to stay.

"I couldn't do that to the club, especially with the faith that (manager) Ronnie Moore has shown in me by making me captain," said Wallace.

"I don't think I could jump ship half-way through when there are more rewards to reap in the last few months of the season.

Tranmere skipper James Wallace has made 23 appearances for the League One club in all competitions this season - Rovers have won 14 of those matches, drawing five and losing just four

"I'm focused on the task in hand, which is playing every week in League One and progressing as a player.

"Maybe in the future, I will step up and I'll have to prove myself as a Championship player, and then who knows from there."

It was hoped he would only be out of action for around three weeks, but after complications in his recovery, Wallace admitted he was unlikely to return before the start of February.

In his absence, Tranmere have maintained their position at the top of League One and remain on course to return to the second tier of English football for the first time since 2001.

Wallace continued: "It kills me watching them, but I'm always supporting the lads and always in the changing room giving advice.

"Max Power has thrived on playing every week. Max and Liam Palmer have made a good partnership together.

"It helps that we've got a and a so it's given the manager a few problems picking his team."