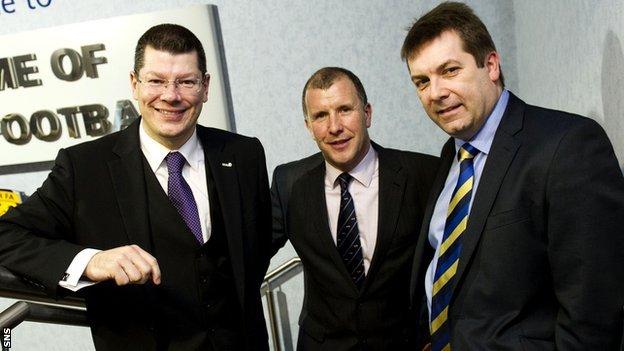 Scottish Premier League plans for league reconstruction are far from certain to be given the green light.

SPL chief executive Neil Doncaster claimed all 12 clubs had agreed in principle to the proposals.

However, some SPL clubs have told BBC Scotland they are wary of committing to the changes.

"We have some reservations. Until we see more details it's far from a done deal," said St Mirren chairman Stewart Gilmour.

Plans to restructure the Scottish game were unveiled last week and are to be voted on by SPL and Scottish Football League clubs.

The proposals for a new unified league set-up, with a top-flight of 12, a Championship of 12 and a National League of 18, require an 11-1 vote among SPL clubs to progress.

But the size of the proposed leagues, and a lack of detail in the plans, is causing some concern among clubs.

"The club is very much pro-change, but will need more information on the plans before making any decision," said Motherwell chief executive Leanne Dempster.

"It's absolutely not a done deal," said Dundee chief executive Scot Gardiner, insisting that while his club in principle support the plans, more discussion with fans was needed.

"We're having an open night for our fans to explain it to them, and if we agree to disagree, then fine.

"There's no perfect solution, but I believe this is the best deal on the table."

And not everyone involved in Scottish football sees the need for change.

"When you see our league this season, it's very, very competitive," he said. "Personally, I don't see a heck of a lot wrong with what we've got.

"To change for the sake of change; I don't think that is a particularly good idea."