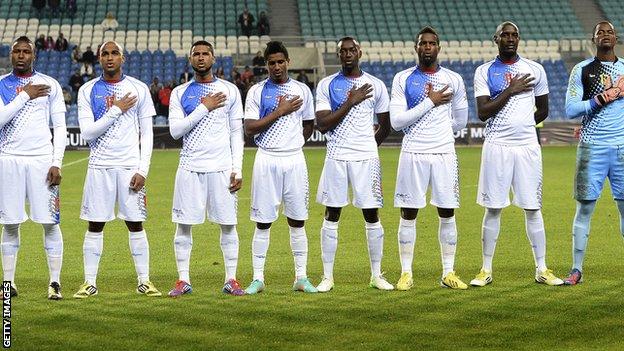 Cape Verde defender Guy Ramos is confident that the Africa Cup of Nations debutants can make the knockout stages of the competition.

The national side face hosts South Africa in the opening match which kicks off at 16:00 GMT on Saturday.

"If we play the game as we should then we should make it through to the second round," said the 27-year-old.

"It's our first time there and no one expects us to win and so every point we get there is a bonus point."

Ramos, who plays for Dutch side RKC Waalwijk, added: "We are one of the smallest countries in Africa and no one expects us to win one match, but we beat Cameroon 4-0, they are a big country and we won. So why can't we do the same thing against South Africa?"

"It is a bonus to play the first game in such a big stadium where the final is going to be played and know that the whole world is watching."

Coach Lucio Antunes has sacrificed some experience as he elected to leave out former captain Lito and striker Dady, two players who been a prominent part of the team in recent years.

Antunes will also be without influential defender Ricardo who has elected to remain with his club side Pacos de Ferreira in Portugal, but there are no hard feelings from his team-mates in the national team.

"Everybody has the choice to play or not and he decided to play in Portugal. I can't do anything about that, it is his decision," said Ramos.

As to what it would mean for Cape Verde to taste victory against South Africa in the opening game, Ramos said the fans at home would savour the experience.

"There has been a lot of partying on the Islands and if we win a game there will be great joy," he added.