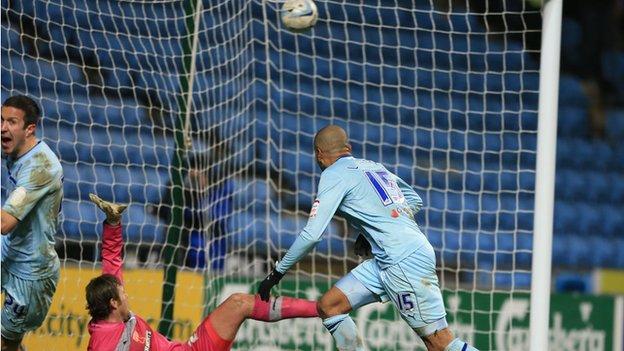 Coventry City have again cut admission prices in an attempt to try and fill the Ricoh Arena for their Johnstone's Paint Trophy northern final first leg against Crewe Alexandra on 5 February.

The Sky Blues have charged only £5 for all their three home ties in this season's competition.

And the League One club have announced that the same 'football for a fiver' promotional offer will be maintained.

It took two injury-time goals from Carl Baker and Leon Clarke to see them through to meet Crewe, whose three three late strikes won their semi-final with Bradford City on Tuesday night.

"We want to get as close to filling the ground as we possibly can," said Coventry ticketing manager Dan Walker.

"The JPT has provided some real excitement this season and the area semi-final victory was one of the best nights at the Ricoh many fans can remember.

"The 'football for a fiver' offer is all about getting as many fans there as possible and in previous rounds it has really worked because our attendances for the tournament have been much higher than the average for the competition.

"So we've taken the decision to stick with that policy after listening to fans and the hope is that we get a big response from the people of Coventry."

Coventry attracted a gate of 5,437 for the win over Burton Albion penalties in early September.

They then drew 10,162 for the northern quarter-final against Sheffield United, also won on penalties, in early December before 12,655 - the Ricoh Arena's second biggest gate of the season - turned up for last Thursday night's win over Preston.

Their average home gate in League One this season is 10,953.

The stadium has a total capacity of 32,609, and Coventry's biggest gate so far in eight seasons there was the 31,407 they drew for the FA Cup quarter-final against Chelsea in 2009.