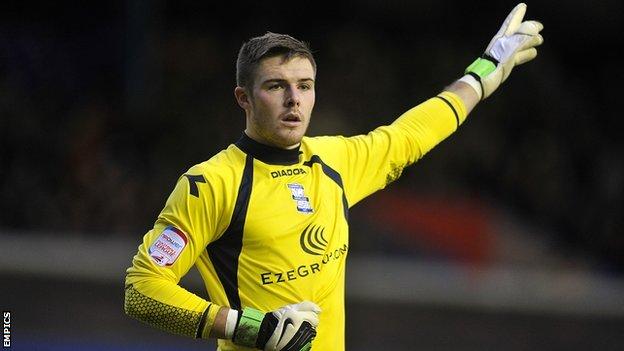 Birmingham City's management admit that they are unsure over the future of teenage England keeper Jack Butland.

The 19-year-old, who made his England debut in August three days before his first Blues appearance, is reportedly set for a move in the transfer window.

It's easy for people to say it's the manager's fault, but he works 24-7 for this club and he doesn't want to be associated with a performance like that

"But whether Jack stays or goes, I'll leave to the powers-that-be upstairs."

Butland has so far not played in any of Blues' matches this season in the Capital One Cup or the FA Cup.

But, after Butland was once again left out of Tuesday night's FA Cup third-round replay defeat by Leeds United, and in light of up-for-sale Blues' need to raise funds, McDermott was asked whether people should read anything into his absence.

"Obviously there's problems here, but we just get on with the football side and whatever will be, will be."

While Colin Doyle came in and deputised effectively on Tuesday night, Butland is expected back for Saturday's Championship visit of Brighton to St Andrew's.

Although Birmingham are just five points clear of danger and 13 points adrift of the play-offs, McDermott says they can put Tuesday's off-night behind them and go on a winning run.

"It's a difficult time when you're not winning games," admitted the veteran former Newcastle United, Liverpool and England midfielder. "And we're conceding too many goals.

"But the players need to believe in themselves. We just need to go on a run, win two or three, and you never know where it will end.

"It didn't look like it on this performance against Leeds. We were disappointing, to say the least, but we are capable of doing it.

"It's easy for people to say it's the manager's [Lee Clark's] fault, but he works 24-7 for this club and he doesn't want to be associated with a performance like that.

"Players sometimes have to look in the mirror and ask themselves whether they've done enough.

"But we've got the quality here. Now we just need to prepare them to get the result we so desperately need against Brighton on Saturday."