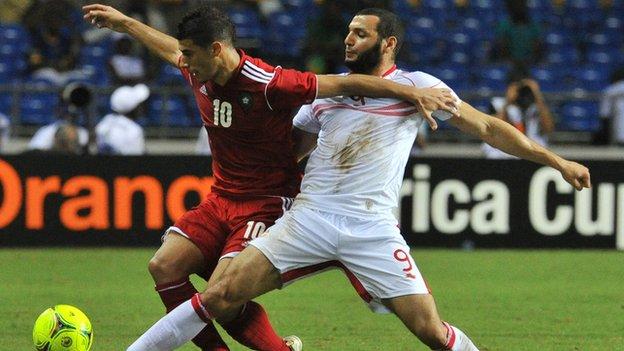 Morocco's inconsistency has been a mystery in recent years, with the Atlas Lions regularly failing to deliver at the Nations Cup despite boasting some fine players.

Arriving at the 2012 finals as a tournament outsider, having thumped 2010 World Cup finalists Algeria 4-0 in qualifying, Morocco promptly lost to rivals Tunisia and co-hosts Gabon as they exited at the earliest opportunity.

On six of their last eight Nations Cup appearances, Morocco have failed to reach the knock-out stages but their Jekyll and Hyde nature is highlighted by finishing runners-up in 2004, beaten by hosts Tunisia in the final.

Their participation at the 2013 finals was in serious doubt after their 2-0 defeat in Mozambique in the first leg of their qualifier, which resulted in the dismissal of Belgian coach Eric Gerets, but his replacement - Rachid Taoussi - steadied the ship in fine style, winning the return match in Marrakech 4-0.

When you look at the players at Taoussi's disposal, it's easy to make a case for why the 1976 African champions should do well in South Africa.

January's finals are an important dress rehearsal for the Moroccans, since they will host the next Nations Cup in 2015.