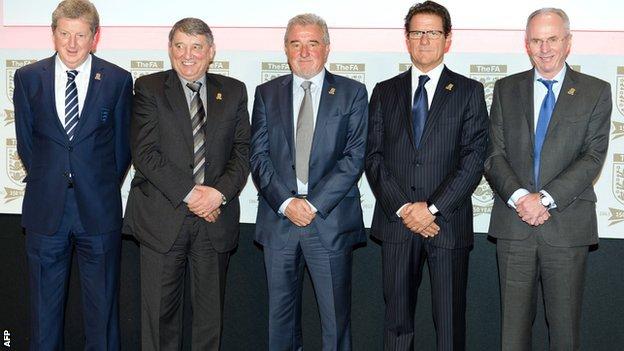 Roy Hodgson has hailed the FA's 150th anniversary as a magnificent milestone - but the manager insists reaching the World Cup is England's utmost priority.

Hodgson hopes to lead England to Brazil for next year's tournament courtesy of a successful qualifying campaign, which comes to a climax in 2013.

"It's an important year, as it comes while these 150-year celebrations go on," Hodgson told BBC Sport.

It was a wonderful day. Reaching 150 years is a milestone, it is so rich in achievement

"But we must make sure we keep our eyes firmly focused on the goal of Brazil."

Hodgson was speaking at a star-studded event, which included previous England managers Graham Taylor, Terry Venables, Sven-Goran Eriksson and Fabio Capello at London's Connaught Rooms, near where the FA was first created.

He added: "The first thing we have to do is qualify for the World Cup, that's vitally important.

"And when we qualify we have to give a good account of ourselves in Brazil and, once you are there, you have a chance of winning it, who knows?

"We have very good young players coming into the game and showing they do have the ability to shoulder the burden, and hopefully we will have a good blend with experienced players as well."

Hodgson added: "It was a wonderful day, what was so special about it was the number of tributes from so many different people, not least of all those who aren't necessarily a part of English football today.

"Reaching 150 years is a milestone, it is so rich in achievement."