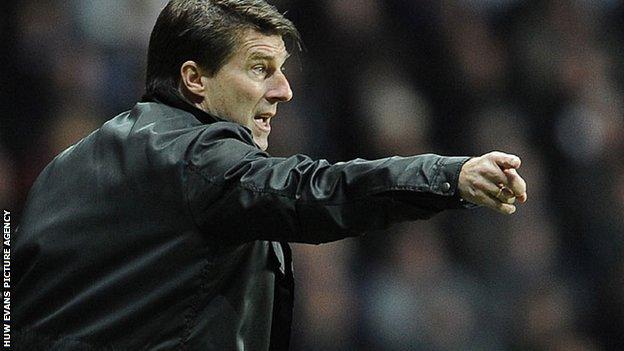 Reports have linked Swansea with Stoke City striker Kenwyne Jones, and that could see Danny Graham leave the Swans.

"While the rules are like that, it's a whole month and we have to accept it."

"Every day you see on television the supposed movements and it will be like that for another 16 days."

Swansea are ninth in the Premier League and hold a 2-0 lead against Chelsea after the first leg of the semi-final in the Capital One Cup.

However, the Swans suffered their first defeat in eight matches on Wednesday when they lost 1-0 against Arsenal in their FA Cup third round replay at the Emirates Stadium.

Graham's last-minute goal earned Swansea a 2-2 draw at the Liberty Stadium in the original tie, but the Gunners, inspired by Jack Wilshere, over-ran Swansea in the replay.

"We just have to accept in the second half they were the better team, so I think it's OK they won the game," said Laudrup.

It was a measure of Arsenal's dominance that Wilshere's 87th minute winner was Arsenal 26th attempt on goal.