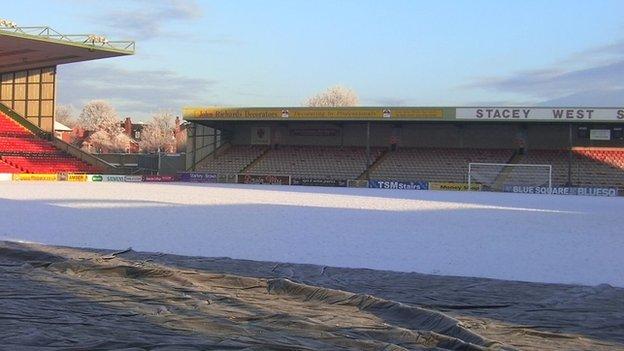 Wrexham's Conference Premier match at Lincoln City on Saturday is off, so are Welsh Premier League games at Bangor, Bala, Carmarthen and The New Saints.

Rugby matches at Pontypridd, Bridgend and Cross Keys, and the away games for Aberavon, Llandovery and Bedwas have been postponed.

Friday's horse racing meeting at Chepstow was called off.

The Welsh Cup Fourth Round tie between Flint Town United and Caerau Ely is also off.

The Met Office says more snow is expected over the weekend, with the heaviest fall in south east Wales. Most of Wales, England, southern and eastern Scotland are also expected to be affected in some way.

Meanwhile, Cardiff Blues' supporters club tweeted for volunteers to help them clear the pitch at the Arms Park for their Heineken Cup match against Sale on Saturday.

"Got a shovel and a few hours to spare? Please head to CAP and help clear the pitch for tomorrow," Blues supporters appealed, saying they had the RAF on standby to help in the event of overnight snow.

In Llanelli, Scarlets were preparing for their Heineken Cup fixture against Clermont Auvergne on Saturday evening, telling their Twitter followers the French side had been due to land at Cardiff Airport later on Friday. The Welsh airport's runway reopened after closure earlier on Friday.

In football's Championship, Cardiff City are due to travel to Blackpool for Saturday, with Bluebirds manager Malky Mackay admitting travelling from the snow-hit Welsh capital was "not going to be easy".

"Blackpool are very confident that they can get the game on," Mackay said.

"I don't think the conditions are quite as extreme in the northwest as they are here... at the moment we're certainly hopeful that the game's on."

In the Premier League, Swansea are due to take on Stoke at the Liberty Stadium, and have told fans there is no doubt about the game going ahead, saying: "the Liberty Stadium pitch is in perfect condition despite the snow."

Despite a covering of snow, Newport County confirmed their Conference match at home to Barrow will go ahead.

Frost covers have protected the Rodney Parade pitch but the club appealed for supporters to turn up at 08:30 on Saturday "with shovels and wheelbarrows" to help clear the snow.