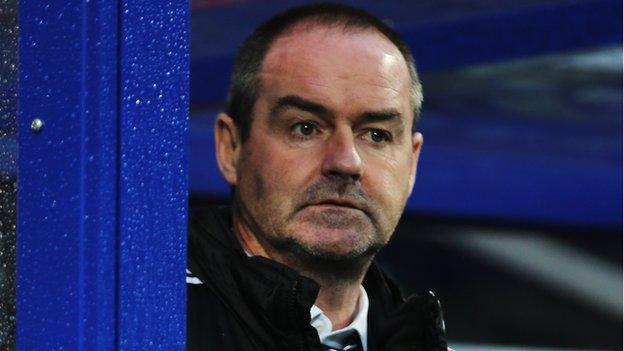 A succession of untimely injuries, coupled with a busy schedule over the festive period, has seriously tested the depth of Clarke's squad.

"We had a lot of games over Christmas and the squad was stretched. It's been a difficult time," Clarke told BBC WM.

"We had 16 fit outfield players against QPR on Tuesday night but there'll be fresh bodies back for the Villa game."

Clarke is now looking with anticipation to the return to full fitness of defenders Jonas Olsson and Steven Reid, along with striker Peter Odemwingie, and midfielder Chris Brunt, who missed the midweek FA Cup third round replay defeat by QPR with flu.

Marc-Antoine Fortune (hamstring) and Shane Long (dead leg) are both rated "50/50" by Clarke, who will also make a late decision on midfielder Claudio Yacob, sidelined for six weeks with a hamstring injury

And, despite being handicapped by the loss of Youssouf Mulumbu to the Africa Cup of Nations, Clarke is confident Albion will not need to make any emergency signings during the remainder of the transfer window.

"I don't think there will be any additions," he said. "We're hopeful of a few more bodies back for the weekend, then we've got a clear 10 days, now we're out of the FA Cup.

"The games have been catching up with us and we looked a tired team at the end against QPR.

"We created better chances but Robert Green has made some good saves and sometimes it's just not your night.

"I can't fault the players for effort, but we've lost more than a bit of momentum. We've had a lot out with injury and we had four defenders on the bench."

Since winning 4-2 at Sunderland on 24 November to climb to third in the Premier League, the Baggies have gone off the boil.

Earlier in the season we carried a bit of luck. Now it's just not happening for us, but, if we can keep putting the effort in, it will come

They have won just twice in 11 games, the back-to-back Christmas victories over Norwich City and QPR, have slid to seventh in the table, four points off a Europa League spot, and are now out of the FA Cup too.

Saturday's home clash with Villa, who have slipped into the bottom three, has to be viewed as the chance to get back to winning ways - especially as, after so long without a victory against their oldest of local rivals, the Baggies are unbeaten in their last four West Midland derby meetings.

"It's a massive game for the club, for the supporters and for our players and we want to win it, but it's not any bigger game than it was going to be anyway," said Clarke.

"Earlier in the season we carried a bit of luck. Now it's just not happening for us, but, if we can keep putting the effort in, it will come.

"We hope to have bodies back. Chris Brunt had the flu, Steven Reid came off the bench late on against QPR and Peter Odemwingie came on near the end but wasn't fit to start.

"Although Jonas Olsson came back at the weekend, it was too big a risk to play him in two games in quick succession after the injury he had. And Youssouf Mulumbu shouldn't be long after the beginning of February."