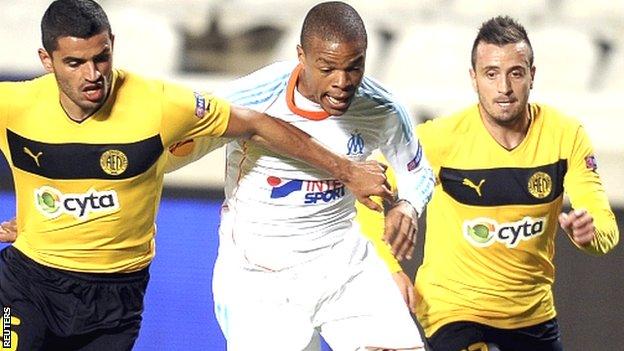 Former Newcastle striker Alan Shearer has questioned Loic Remy's decision to sign for QPR instead of the Magpies.

The forward, 26, from Marseille on Wednesday, three days after a deal was agreed with 16th-placed Newcastle.

"I am surprised to see Remy go to QPR instead of Newcastle," said Shearer.

"I would have a good guess financial things had a part to play. While I hope QPR get out of it, I find it hard to say he chose them over Newcastle."

France international Remy travelled to Tyneside on Sunday for talks and a medical after Newcastle agreed an £8m fee with Marseille.

Keen to replace top scorer Demba Ba the Magpies were hoping to complete a deal by the middle of this week.

But QPR manager Harry Redknapp persuaded the front man to change his mind and join the relegation-threatened Loftus Road club. It is believed that after spending a club record £8m to sign him.

Remy's decision means Newcastle - two points above the relegation zone - still need to replace Ba, who remains their leading scorer with 13 goals despite his move to Stamford Bridge on 4 January.

"It is a tough one for him," Newcastle's all-time leading scorer Shearer said. "He will believe he has a better chance of winning things there and at the moment he probably has.

"Having said that, he gave his all in a Newcastle shirt, played well and scored goals, so I don't think anybody can complain.

"But it is disappointing to see our top scorer leave. Hopefully, they will have a plan B and a plan C because it's left Newcastle with a huge gap that they obviously need to fill."